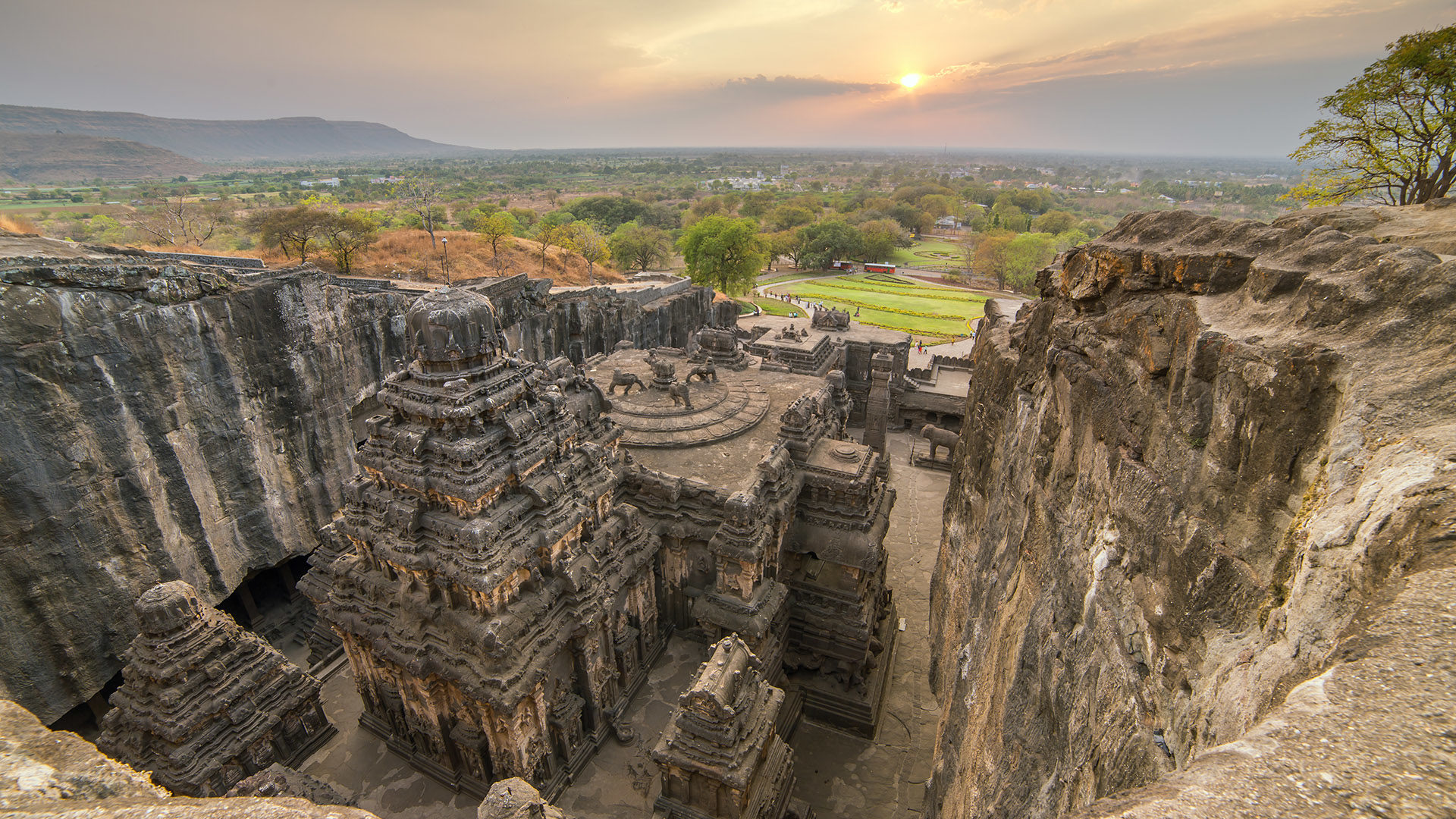 An entire mountain, cut by hand into palaces of worship, held from collapse by elaborately carved columns and decorated with colossal statues from three major religions. The caves at Ellora are the largest rock-cut monastery-temple complexes in the world and a UNESCO World Heritage site.

Home to India’s greatest collection of Hindu sculpture, there are over 100 caves at the site, all excavated from the basalt cliffs in the Charanandri Hills. 34 are open to public and visited by some 1.2 million each year, the vast majority of whom are domestic tourists. These consist of 12 Buddhist (caves 1–12) built from the fifth to the seventh century, 17 Hindu (caves 13–29) built from the seventh to the ninth century and five Jain (caves 30–34) caves built in the tenth century. Each set of caves represent deities and mythologies prevalent at the time they were sculpted and that they were built so close to each other is an illustration of the religious harmony the time. The Jerusalem of India with a difference – no animosity.

Although the caves served as monasteries, temples and a rest stop for pilgrims, the site’s location (thirty kilometres from the modern city of Aurangabad) on an ancient South Asian trade route also made it an important commercial centre in the Deccan region. Funding for the construction of the monuments was provided by royals, traders and the wealthy of the region.

I started with the Buddhist temples being drawn by the three-storey masculine columns of temple 12. Over the centuries, its imposing façade had not deterred visitors and not having been ‘lost’ like the rock-cut temples of nearby Ajanta, it had been vandalised over the years. None of the paint and delicacy of paintings, that make Ajanta so enchanting and magical, remained. Instead the impassive and stoical serenity of seated Buddhist statues.

Temple 10 was built in the seventh century. I marvelled at the Greek influence – connectedness of worlds – in the Ionic capitals and Versace motifs. But it was the sound that struck me, literally. As Amud began chanting an eerie acoustic filled the cavernous nave-like room and began to echo and reverberate, the sound coming back like a Tibetan horn that I felt viscerally.

Kailasha Temple, less romantically known as Cave 16, features the largest single monolithic rock excavation in the world and is deservedly the best-known of Ellora’s rock-cut temples. Its centrepiece is a three dimensional, three-storey symmetrical chariot shaped monument dedicated to Shiva. The free-standing and delicately carved temple is smothered in sculptures depicting scenes from the Ramayana, the Hindu classic.

Outer walls open into an airy courtyard, surrounded on three sides by columned chambers set deep into the cliff. These too feature sculptures depicting the gods and voluptuous goddesses from mythologies found in Vaishnavism, Shaktism as well as relief panels depicting the narrative story of two major Hindu epics. Everything and everywhere is charge with symbolism. Greek sculpture was all about realism but for the Hindu sculptors it was symbolism.

Whilst the intricacy of the carving and the attention to detail – a chain and bell on an elephant are not vertical thus signalling movement – it is the scale, the numbers that I find most staggering. The site is one hundred feet deep – it was carved from the top to the bottom. It occupies three million cubic feet in volume. It is estimated that 200,000 tons of rock were removed. It took some 7,000 workers 200 years to complete. The sharpening of chisels was an industry of its own.

Numerous questions raced through my mind. How do you manage the training project over such a period of time? How do you inspire team? How do you finance it over such a long period? There was no seam or joint so it’s cut from a single rock – how did they know that there was not a fault or flaw in the rock? Some fringe elements have postulated the ancient alien theory in explanation of the incredible vision and planning that was required for such a monumental undertaking.

The Jain temples are the most elaborate – every inch decorated in flowers, animals and gods with a rococo flair. Cave 32 is a cluster of shrines of which the lower floor is incomplete but the upper floor holds phenomenal detail and traces of paint remain, but centuries of occupation have largely worn them away.