This 13-day classic journey is the perfect holiday for anybody visiting Bhutan for the first time, taking in the main sites of Western and Central Bhutan whilst staying in a mix of traditional Bhutanese guest houses. 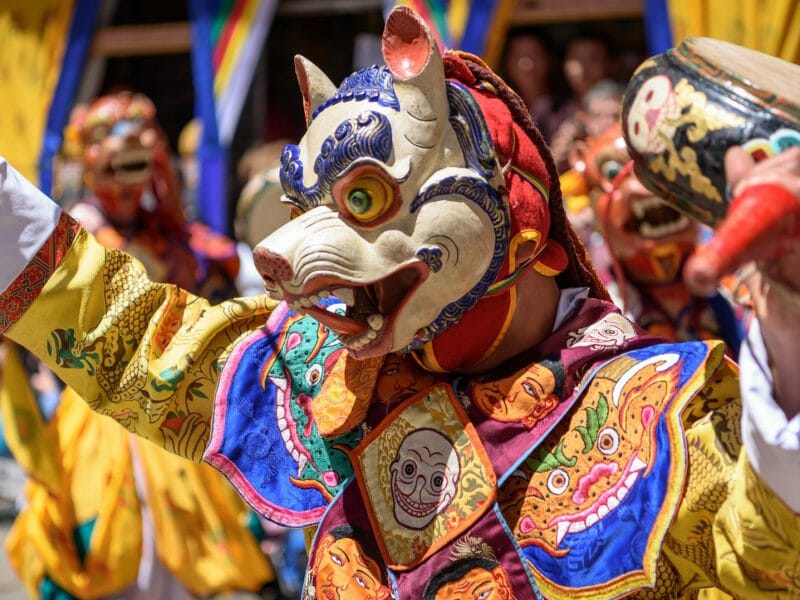 Bhutan hosts the annual Punaka and Paro Festivals in March and April. 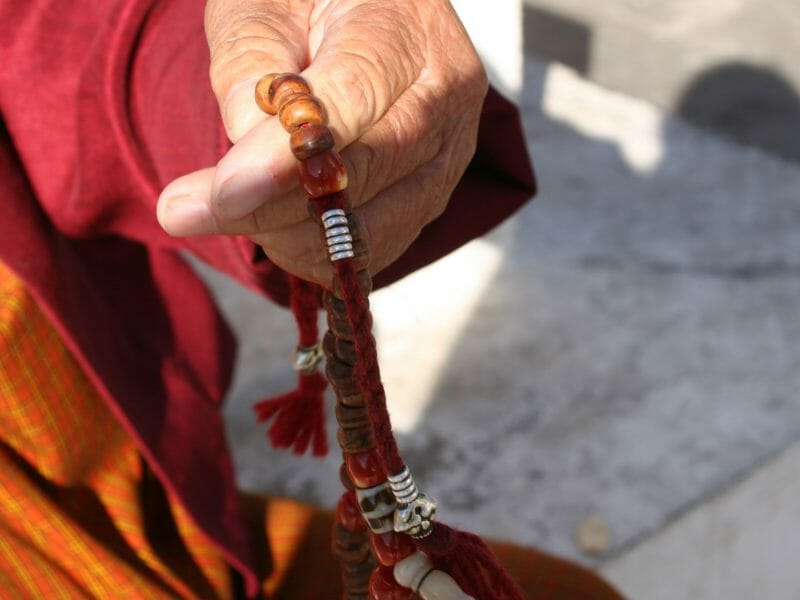 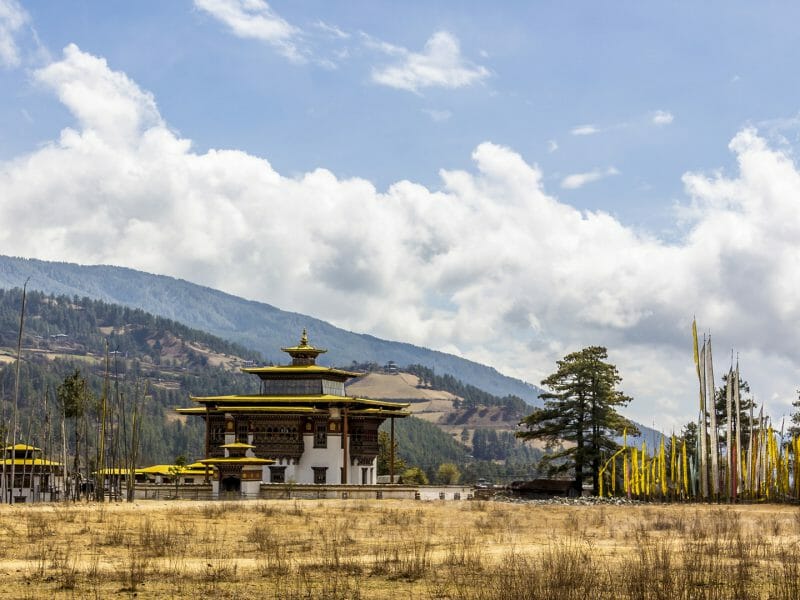 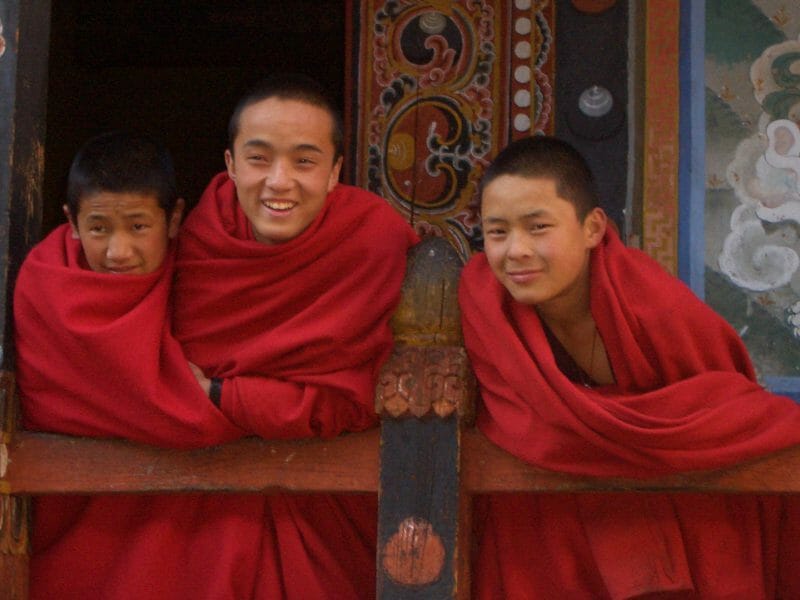 This holiday suits anybody interested in immersive cultural travel. For the first time visitor, it is the perfect blend of views, Bhutanese culture, and walks. Explore the capital of Bhutan before crossing spectacular passes into Central Bhutan with your own exclusive driver and guide. Driving plays a large element of getting around this country as road journeys are inevitable to get around.

Bhutan on your wishlist? Talk to our experts about tailoring this trip for you.

Despite its relatively large size by Bhutanese standards, the city retains a friendly feel and relaxed small town vibe. Little shops and colourful marketplaces fill the city, squeezed between growing signs of modernity and constant reminders of Bhutan’s steadfastly traditional way of life.

Bhutan hosts the annual Punaka and Paro Festivals in March and April. 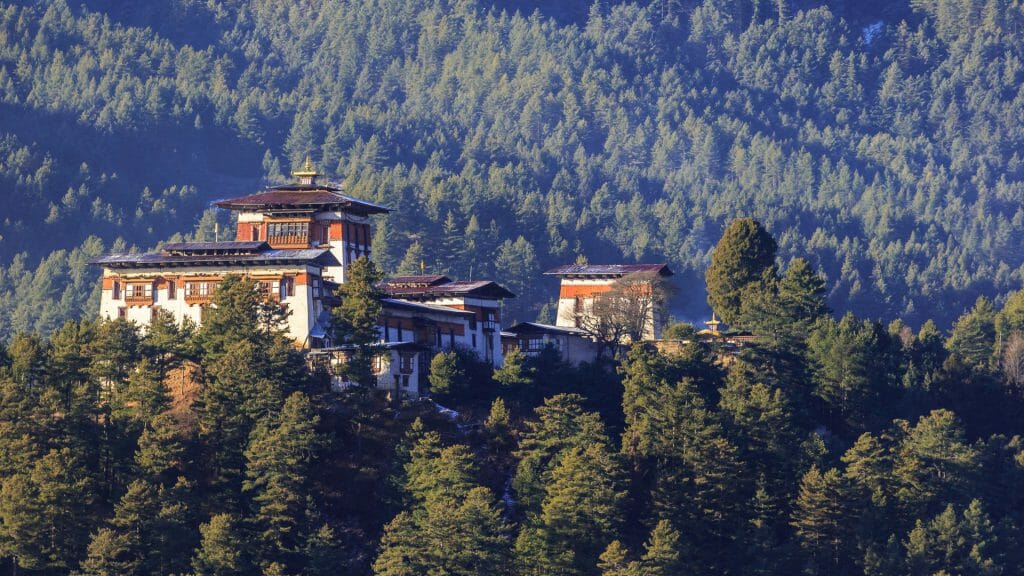 Overlooked by the impressive Gangtey Gompa, the area is renowned for its black-necked cranes.

Overlooked by the impressive Gangtey Gompa, the area is renowned for its black-necked cranes.

Bhutan hosts the annual Paro Festival in March and April.

Drive up to the Dochu-La pass (3,088m/10,130ft) stopping here to take in the view and admire the chortens, Mani walls, and prayer flags which decorate the highest point on the road. If skies are clear, the high Himalayan peaks towards the northeast will be revealed in all their glory. On a clear day, the following peaks of Masagang, Tsendegang, Terigang and also Gangkar Puensum, the highest peak in Bhutan at 7,497m can be seen from this pass.

Another extraordinary experience to be included during your journey is to take to the saddle and bicycle. Break up long, winding journeys by car by cycling some of the downhills. This is not only exhilarating but gives you a closer connection to your environment and its people.

Visit the impressive Taktshang Monastery, meaning ‘Tiger’s Nest’. Arguably Bhutan’s most famous monastery, this sacred building was built over a cave used for meditation by Guru Rinpoche. Said to have arrived here by flying tiger, Guru Rinpoche is regarded as the ‘Second Buddha’ by Ningma Buddhists.

Sitting precariously on a cliff ledge, this holy place of pilgrimage takes around two hours to reach on foot. The steep path passes through the coniferous forest up to a viewpoint from where there are spectacular views of the monastery.
Those who are feeling energetic can continue to the Temple of Taktshang. The path is challenging, but the temple’s magnificent location makes it worth the effort.
Read More

Festivals or tshecu are an intrinsic part of Bhutanese life. They are colourful with masked dancers and bright costumes. Bhutan hosts the popular Punakha, Thimpu and Paro Festivals which attract thousands of people. There are also smaller festivals happening throughout the year which may feel more authentic, as they don’t attract such large numbers of tourists. Travel with Steppes and visit Khotakha Valley, known as “Beyul” -the hidden valley. With new lodges on the horizon to provide a comfortable stay, a visit to the Khotakha Festivals held in May, August and September will offer greater local interaction.

The Black Cranes of Phojikha Valley

Overlooked by the impressive Gangtey Gompa, the area is renowned for its black-necked cranes. These rare birds escape the cold Tibetan winters by sheltering in this lush valley. Well worth a visit is the Crane Information Centre, where you can observe the cranes through binoculars and learn more about these endangered species. There is a one-day festival dedicated to the cranes on one auspicious day in November. The festival is celebrated in the courtyard of the Gangtey Goenpa.

With its superb setting and sweeping views over the stunning Phobjikha Valley, this lodge offers an excellent base to explore this beautiful area. Drawing its inspiration from the traditional, rural Bhutanese architecture, the lodge was designed and decorated using interiors and furnishings to showcase the vibrant local culture. The focal point of the lodge is the informal lounge and dining space with comfortable sofas set around open fires, alongside floor-to-ceiling views of the lush valley below. The twelve beautifully appointed guest rooms also each have their own fireplace. Friendly, engaging staff ensure your stay is memorable.

Six Senses Bhutan are the finest collection of remote lodges in Asia and a welcome addition to the other luxury-level accommodation on offer. Designed to be experienced as a circuit, a stay at each lodge provides a seamless experience between the five lodges. Each lodge is different, yet all share the same farm-fresh dining and extensive spa facilities.

Prices will vary depending on the time of year you are travelling. This itinerary includes stays at boutique guest houses, however, uniquely styled five star comfortable hotels can be added to your holiday too. Prices do not include international flights. Please ask one of our Travel Experts for an accurate quote. Flights purchased through Steppes Travel departing from the UK are ATOL protected.

This Itinerary
Price
From £5,600 Per person

The coldest month in Bhutan, but it is very dry and crisp with clear skies. The south of the country, at lower elevations, is warmer.

Temperatures rise, as spring bursts into life. Hillsides are abundant with blooming wildflowers. It is still chilly at high altitudes, but the skies are clear. Overall, a fantastic time to visit.

An ideal time for trekking, as temperatures continue to rise. The chance of a shower increases too, but it is not monsoon season yet. Make sure to book accommodation in advance.

Temperatures, humidity, and rainfall all increase. Visitor numbers drop, however, and the rhododendrons are still beautiful.

The start of the monsoon season. Not a recommended time to visit, although views can be spectacular after the rains clear.

The monsoon is in full swing. Temperatures but also rainfall peak. Not a good time for trekking

Sightseeing is still possible but the monsoon season continues.

The rain starts to abate, and by the end of the month, most days are fine and dry. A changeable month, with warm temperatures to be enjoyed between the showers.

The perfect time for hiking, with stunning views and comfortable temperatures. The busiest month though, so we recommend booking accommodation well in advance.

Rainfall will occur as temperatures begin to drop and expect it to be chilly at higher elevations. A great time to see rare black-necked cranes.

The start of winter, and cold, crisp days. Visitor numbers drop, but there are still stunning views to be had for those willing to wrap up.

Idea
Bhutan
Bhutan Family Adventure
Travelling with kids in Bhutan isn’t going to be a walk in the park, but it’s…
10 days from £5,175pp 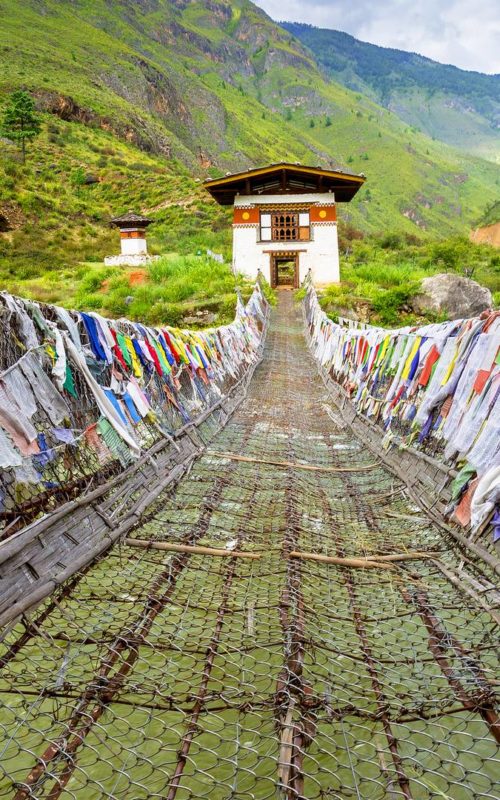 View Holiday Idea
Idea
Bhutan
An Introduction to Bhutan
This 13-day classic journey is the perfect holiday for anybody visiting Bhutan for the first time,…
13 days from £5,600pp 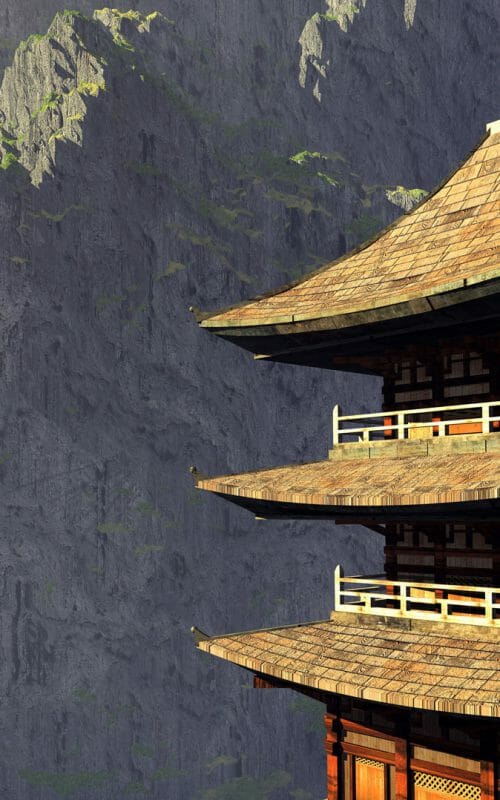 View Holiday Idea
Idea
Nepal
The Wild Side of Nepal – Family Conservation Holiday
Escape with your family for an adventurous and educational holiday to Nepal. Spend time amongst the…
13 days from £3,450pp 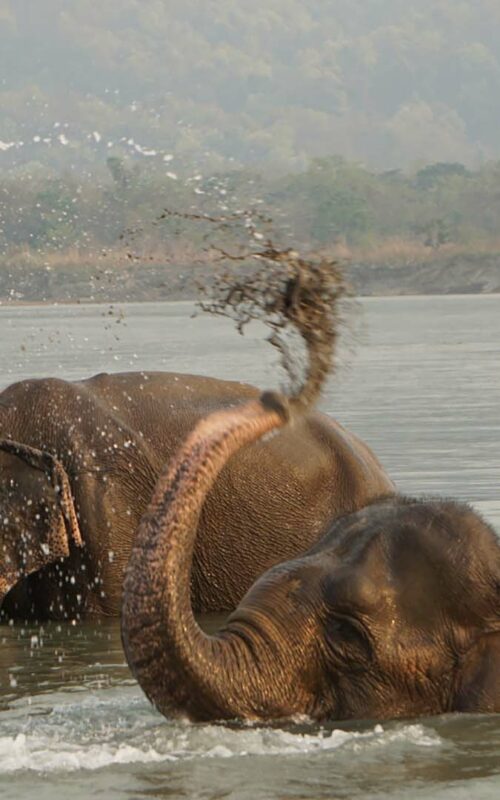 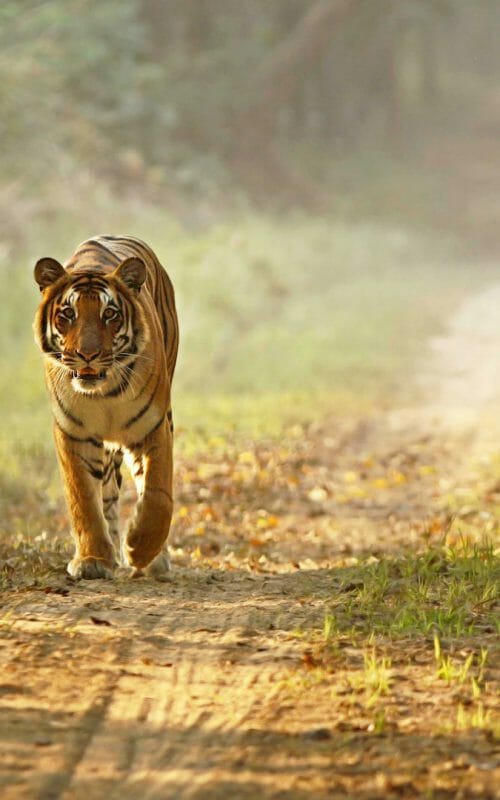 View Holiday Idea
Idea
Nepal
Nepal – Mount Everest Heli Touring
Nepal is home to eight of the highest mountain peaks in the world including the tallest,…
6 days from £5,465pp 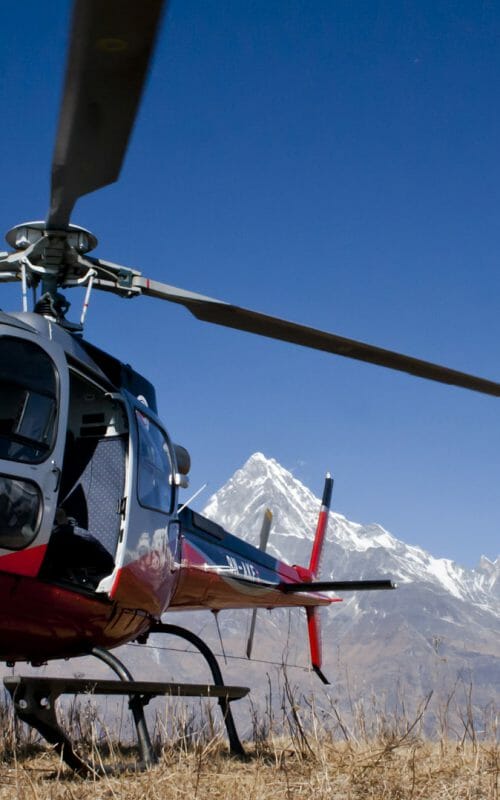 View Holiday Idea
Idea
India
Tiger Safari in Central India
This holiday suggestion is perfect for anyone keen to see tigers in the wild. Experience 10…
11 days from £4,940pp 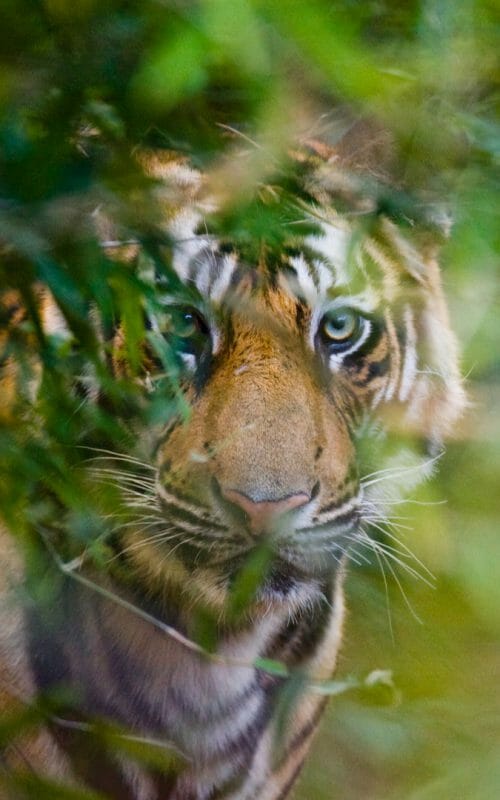 View Holiday Idea
Idea
India
A Family Friendly Holiday to South India
This family-friendly journey to South India is brimming with activities to satisfy even the most adventurous…
14 days from £3,855pp 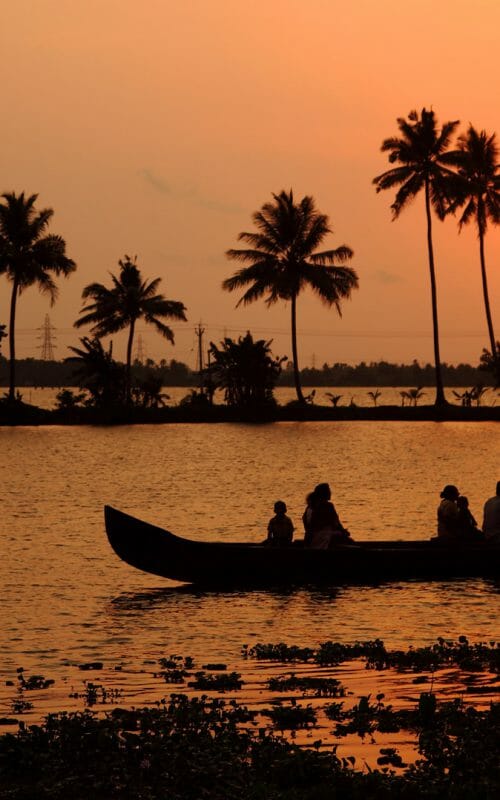 View Holiday Idea
Idea
India
India – The Golden Triangle with Tigers
This classic tour of India’s Golden Triangle takes you to Delhi, Agra and Jaipur and also…
8 days from £4,025pp 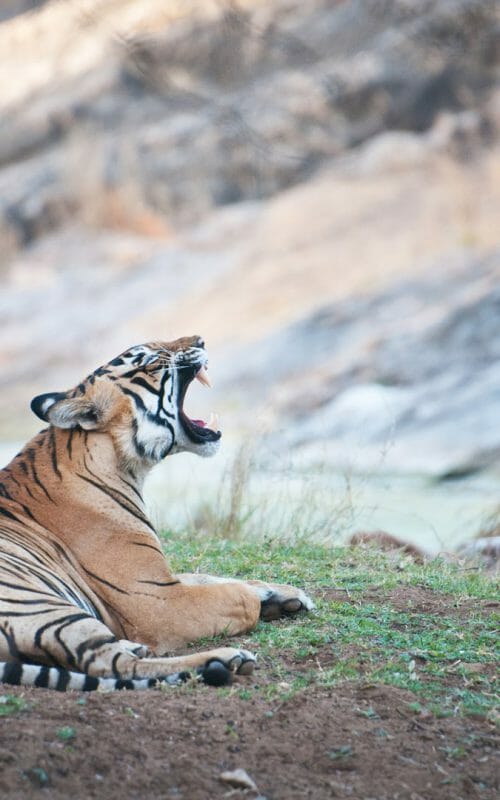 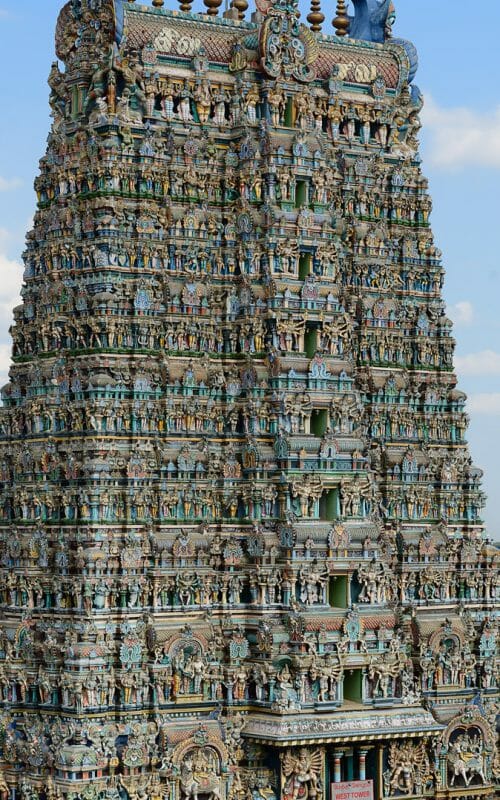 View Holiday Idea
Idea
India
India – The Headhunters of Nagaland
This fascinating journey combines a visit to India’s north-eastern states of Nagaland and Assam. Perfect for…
12 days from £3,450pp 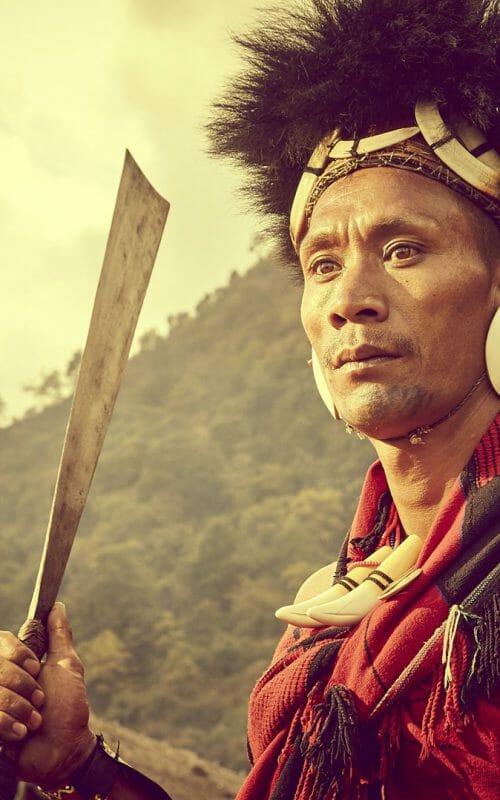 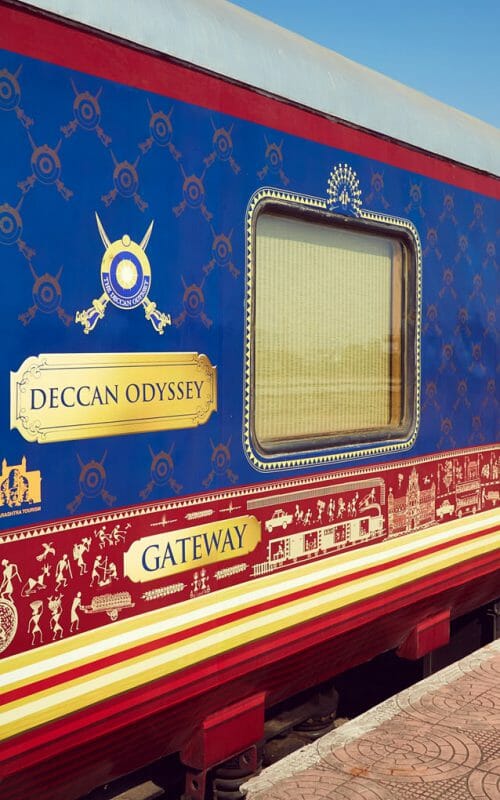