The laughter of dolphins in Mozambique with Hanli Prinsloo

Sitting in the shaded bliss of Tartaruga camp, cooled by the breeze, the sound of the surf rushing and crashing along miles of empty beach, I reflect on achieving one of life’s ambitions – swimming with wild dolphins.  The whole experience had been sublime, beyond my wildest expectations, and in no small part because I did so in the company and confidence of a world-renowned free-diver.

We met at the small but excellent Dolphin Centre for an eighteen minute video briefing that was thorough and insightful. Duly briefed, we were transported to the deserted beach on the back of a trailer. The boat was launched with an effort – its weight on the beach considerable but once in the water it found its buoyancy. The unerring eye of Johann, our Swedish skipper, picked a line through the rolling waves and we zoomed out across the surf.

“Do you want to try and find dolphins straight away? Or do you want to do some freediving first of all?” Hanli asked.

Against my better judgement we chose the latter – how often do you get to enjoy the tuition of a world champion, someone who is a master of their craft and gets to depths that few terrestrial mortals dream of. Hanli Prinsloo is a champion freediver now ocean conservationist – she has her own foundation I AM WATER.

We don our fins and masks and slip into the water. Hanli’s entry is sylphlike, mine more ungainly. Once in the water such differences are only exemplified.

She swims with a freedom and grace that is a delight to watch. No hurried movements, no wasted energy, just composed, measured and wonderfully economic in her movement.

We all hang on to a yellow buoy as Hanli tries to condense days of training into a matter of minutes. The nub is that it is about breathing properly and relaxing the body.

After a few minutes breathing coaching, I dive. Left hand pulling on the line, right hand squeezing my nose. I am concentrating, trying hard to remember my instructions. Every movement conscious and deliberate. I am not relaxed. I am expending energy. Depressingly quickly, I run out of breath and race back to the light and air of the surface.

“You had problems equalising?”

I nod with beginner’s embarrassment.

“It sounds counter-intuitive but it helps if you keep your chin close to your chest.”

Hanli was not wrong and at my next attempt, I dive unencumbered by pressure in my ears. I am impressed by how deep I am. I make the mistake of looking back from whence I had come. Alarm. I panic and rush back to the surface, my lungs gasping furiously for air.

After several dives, I learned to relax and once I had done so it was curiously calming. I wanted to go longer and deeper. Yes my competitive spirit was in part a driving force but it was more the tranquillity of the deep.

Whilst freediving was a magical moment, it was the hors d’oeuvre before the main course of swimming with bottlenose dolphins. Hanli had explained to us that whilst there are a number of transient pods there were also a couple of resident pods in this area. She talked us through their different behaviours from sleeping to reproduction, from feeding to play.

She was animated whilst talking about the dolphins. Clearly in love with their curiosity and playfulness. Yet never ready to take advantage of the dolphins’ openness – she was adamant that in no way were we to force them to interact with us and certainly never to touch the dolphins.

“Dolphins,” cries Johann and we follow his outstretched arm to see a small pod of dolphins breaking the surface, their dorsal fins and backs arched in a languid movement.

We slip into the water, trying to make as minimal noise and splash as possible. I put my head under the water and already Hanli is many metres below me, moving effortlessly. And then I see them, silhouetted against the sand a number of dolphins slowly on the move.

A couple of things strike me. Firstly, they are much bigger than they appeared from the boat – underwater I appreciate their full size and that they are at least as long as me, a couple of metres. Their grace and élan. Their differing shades of grey. That Hanli sings to the dolphins and in doing so they surround her siren-like.

In spite of Hanli’s best efforts, this pod was not for playing and we keep up with them for a while and then leave them to their own devices. Or rather they pick up the pace and leave us in their wake. We clamber back into the boat euphoric and continue our search for other dolphins. We all chatter excitedly as we reflect on what just has been and in hope of might what come.

A number of minutes later, Johann spots another pod. Whilst nothing in wildlife is guaranteed, not least given our cavalier guardianship of our planet, the waters of southern Mozambique are dolphin rich. We take the plunge once more with great anticipation.

The odds are more evenly matched. Three dolphins and three of us. The dolphins take up the challenge and swim and circle us in playful glee. In trio, they spin effortlessly around me, watching me all the time. They twist, turn and tantalise, swimming no more than a couple of feet from me. The thrill, the privilege. One looks up at me and we have a visceral eye contact for several seconds. Another swims up to my mask, almost kissing me inquisitively before racing away to come circling back for another look.

They spiral around revealing a lighter underbelly. On another I see what Hanli later tells me are freckles. One picks up a cuttlefish, another picks up a piece of seaweed. Throughout they are clicking in constant chattering communication.

Nearly an hour later I haul myself back into the boat laughing deliriously. 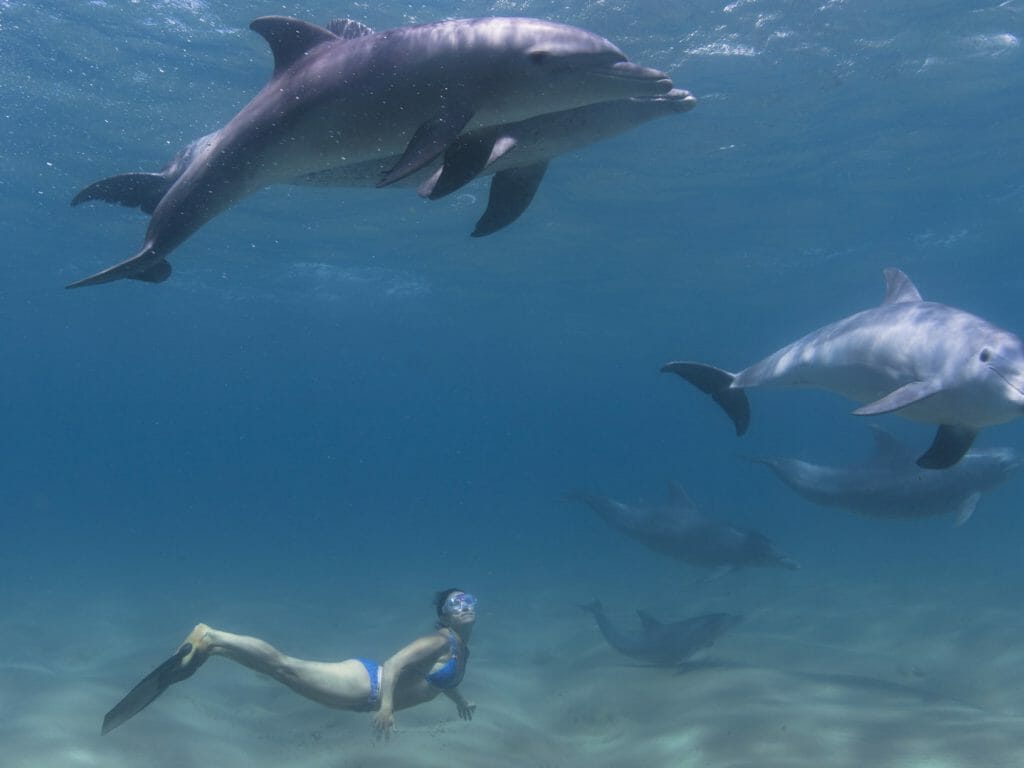 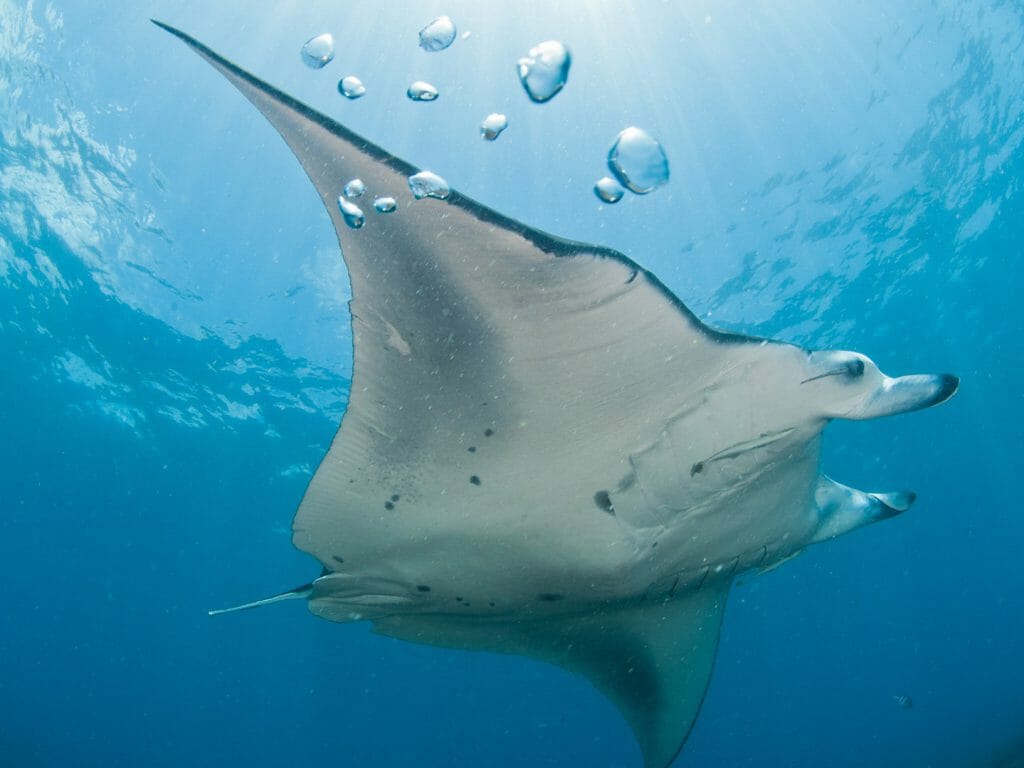 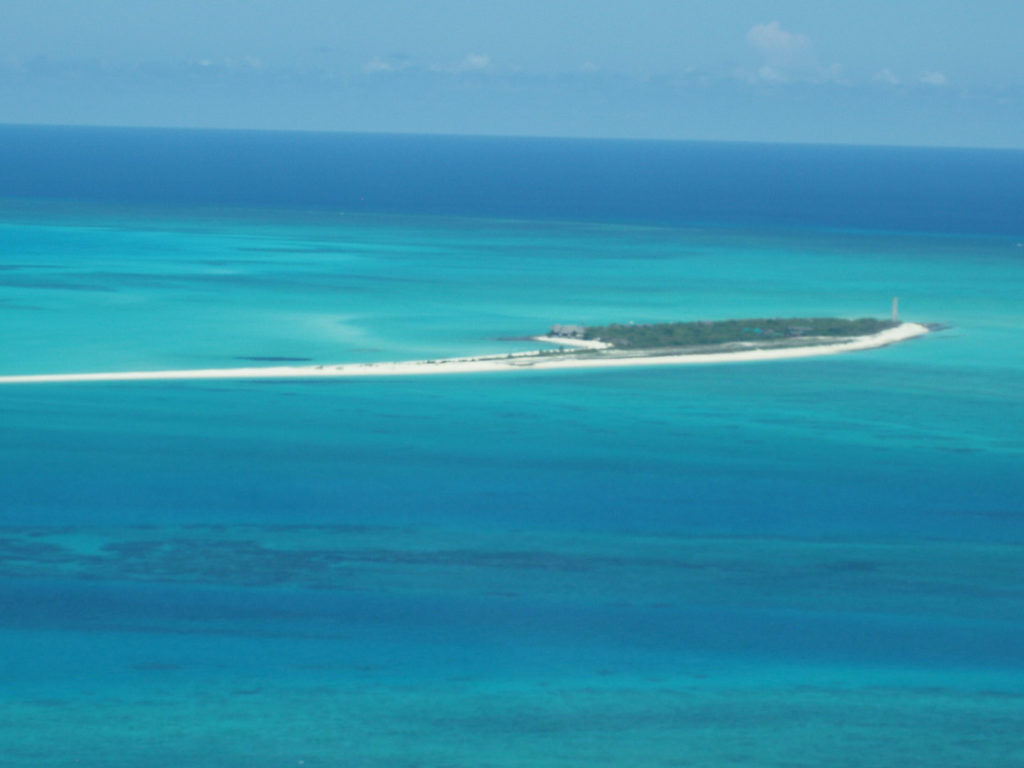 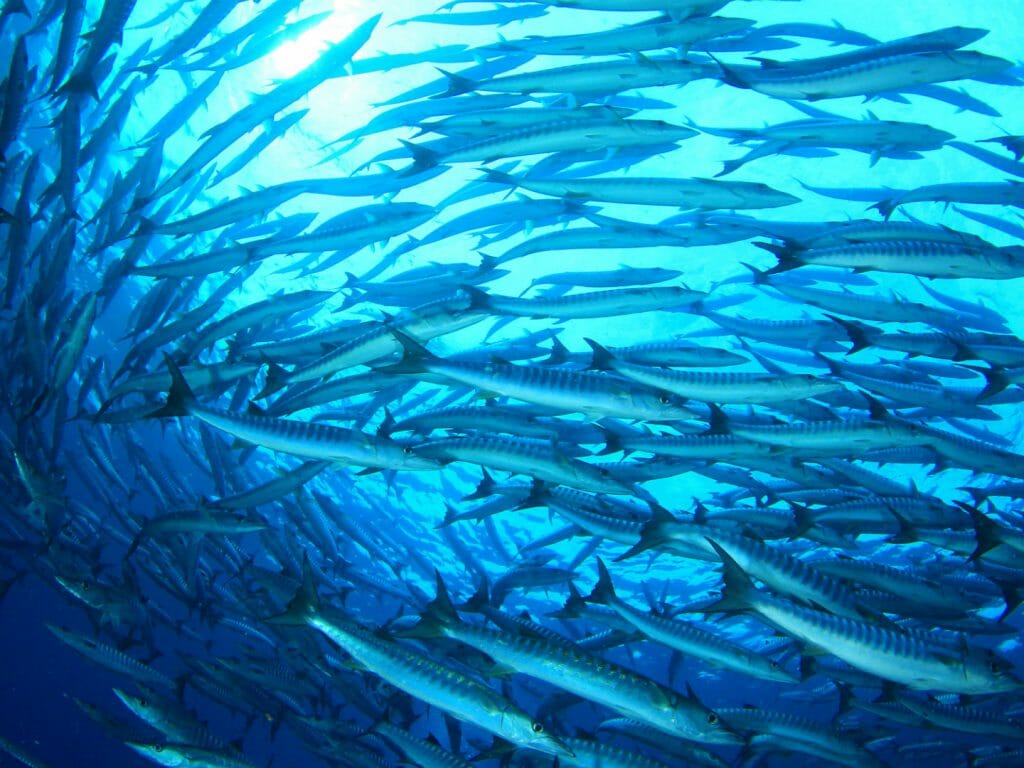