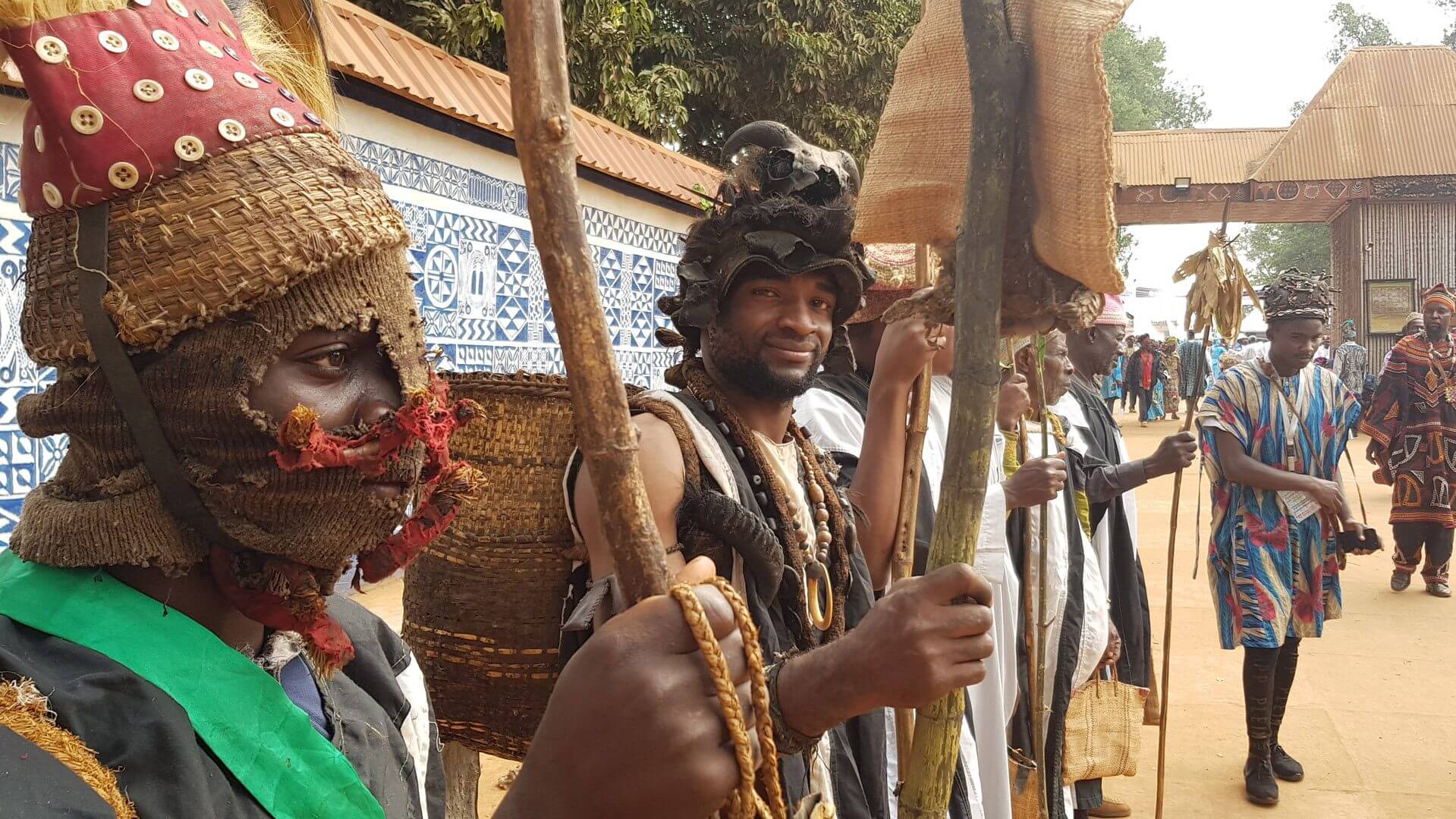 Home Blog Cameroon: The Nguon and Only Tourist

Cameroon: The Nguon and Only Tourist

Shielding my eyes from the West African sun, it is not the red and yellow harlequins that catch my eye. Nor is it the pink feathered dancers, reeling through the crowd or the boys wrapped from head to toe in coloured cloth, like psychedelic mummies. What really holds my attention is the 40-foot-high model spider, complete with fangs and hair, riding a two headed snake.

I resist the urge to pinch myself. Striking women glide past, bold make-up painted onto coy faces. Men dressed in flowing west African Agbada robes swagger through the crowd greeting each other. Regal emirs in long black cloaks and mirrored shades walk past. With my head still spinning, a man in top hat and tails appears, puts his arm around me and takes a selfie. “Bienvenue a Nguon!” he says with a shake of the hand.

Welcome to the Nguon Festival, Foumban, in the western highlands of Cameroon. Known as “Sheme Ngu” in the local language, it is over 500 years old. This wonderfully eclectic event draws members of the Bamoun community from across West Africa. Originally established to settle land disputes, this biennual harvest festival is now a week-long celebration of Bamoun culture. Horse parades, mock battles, food and trading all take place. It is also a chance for the people of the region to pay homage to the ruling sultan.

Two days earlier, I arrived in Douala, a vibrant, colourful city with a languid, tropical charm. After a day exploring faded colonial buildings, I headed north. The drive was an adventure. I spent a night near the spectacular (and sacred) Ekom Falls to break the journey, before the steamy jungle slowly gave way to high grasslands.

The small, but comfortable minibus rumbled along the dusty, cracked road, the air-con clicking on and off with every bump. The regular police checkpoints were more annoying than threatening, becoming more relaxed the further from the city I travelled. The last checkpoint before town was a breeze and after the promise of a beer, I was waived through with a smile.

Reaching Foumban itself, I got out to stretch my legs. I looked up to see a skyline dotted with weathered medieval turrets. Topped with carved animals and other symbols, they reveal a deep-rooted animism but also denote the homes of royal courtiers.

Mama, my guide, is one such courtier and local chief. He appears out of nowhere and cuts a striking figure. Nearly seven-foot-tall, dressed impeccably in spotless white robes and a skull cap, he looks every inch the royal. I ask him how he found me so quickly. He smiles as he answers. “You are the only white person here.”

As befits a royal of his standing, he is a man of few words. By contrast, his son Abdul, who also joins him, is very much the playboy prince. Smart loafers and a giant watch are hidden under an outfit of rich blue silk. Full of energy and charm, he greets me warmly. “You made it!” He exclaims – as surprised as he is happy.

Together, we make our way towards the palace. Mama glides through the crowds, who part on his approach and I follow in his wake. I ask Abdul more about the sultan, in between him greeting his friends. “Being a sultan is a huge honour.” He says, shaking numerous hands. “You are sultan for life. It is not hereditary, so anyone can be chosen, but they are always male. Here, let me show you.”

We arrive at a large mural on the palace wall, covered in portraits of past sultans, their names and the dates of their rule written beautifully in both French and Arabic. It reveals a royal lineage stretching back to the 1300s. There are some impressively long reigns – 40, 50 and 65 years – but then one that reads just 30 minutes. I ask what happened. “She was a woman.” Abdul says by way of an explanation.

At the top of the mural, I see an image of a spider and two-headed snake and realise this is the royal coat of arms.  “Why these animals?” I ask.

We continue to the palace gates themselves. On seeing Mama, the royal guards wave us through, leaving behind a scrum of worshippers haggling to get in. I stop and stare at the medieval scene before me. Tribes from across the kingdom are queueing to meet the sultan, heads adorned with skulls and horns, robes covered in skins and scales. Baskets or rifles slung over their shoulders, they wait patiently as traditional dancers entertain the crowds. Hundreds of courtiers sit in a semicircle, around the throne, enormous feathered hats shielding them from the sun. A few nod to Mama as we arrive. At the centre of it all, in dazzling robes, spears crossed on the throne behind him, sits the sultan himself, greeting his subjects one by one.

The king is clearly adored, and this festival is also a show of strength to the incumbent and controversial president, Paul Biya. Having ruled Cameroon for 36 years, Biya is wary of any authority that is not his own. The sultan rules benignly – but absolutely – over some one million subjects. Support for the president declines the closer to Foumban you get; Biya’s roadside election posters became increasingly defaced on the drive here. In the town itself, all his posters are painted black.

But this is a celebration of one of Africa’s last feudal kingdoms, not a protest. Cameroon is a country in the middle of its own identity crises. Skirmishes in the far north and unrest in the English-speaking regions means Nguon is seen as a festival of hope and an affirmation of identity – a centuries-old constant in changing times.

It is, however, a living culture and is always changing. Nguon is a pagan festival in an Islamic society, lending the proceedings added colour. Islam is welcomed here and then absorbed into the Bamoun identity. As if to remind me of this, a call to prayer rings out in the distance and the crowd answers in the setting sun.

A group of proud, elderly women invite me to sit with them to watch the proceedings. I try to find some common ground and, as we talk in broken French, I notice their tattoos. A small spider on the side of their face, near the eye, a snake on their wrist. I risk asking for a picture and they are delighted. But before they let me photograph them, they careful cover their heads with scarves and put their handbags on their laps. They all ask to see my photos and tell me to delete the ones they don’t like.

They are the wives of one of the emirs, whom I notice sitting quietly to one side. He looks impressive, in his court robes, but I notice that behind his shades his eyes are closed, and he is fast asleep.

I turn my attention back to the king and amongst all this royal finery, an old man stands out. Not because of his elaborate costume, but because of its simplicity.  A small leather pouch around his neck, barefoot and holding a large staff, he wears a crown of freshly picked leaves. I wonder what journey has brought him here, before a bell is rung and the man steps forward to kneel before his ruler.

Reaching into his pouch, he drops something tiny into the sultan’s outstretched hand. The king passes this to his aide in exchange for a gift, which the old man takes. The sultan mutters something inaudible and even though his head is bowed, I see the old man’s face light up with a grin. The sultan grins back, before placing a hand gently on the man’s shoulders. The bell rings again and the moment passes. The old man rises slowly and walks past the nobles, barefoot and happy, back to his life and family with a tale to tell.

It is also my time to go. It is getting dark, but the festivities will continue through the night. I leave the crowd and make my way slowly out of the gates, simply trying to take it all in. I say my goodbyes to Mama and Abdul. They thank me for coming and wishing me well on my trip through Cameroon, then disappear into the crowd, soon lost in the fading light. I turn and see the top of the palace, the spider and snake, guarding the stately treasures, safe I hope, for the next 500 years.