The islands of Mykonos and Santorini make the perfect luxe holiday combination that will leave you thoroughly pampered. Ideal for both honeymooners and couples that like to hang out in Greece’s most happening destinations. 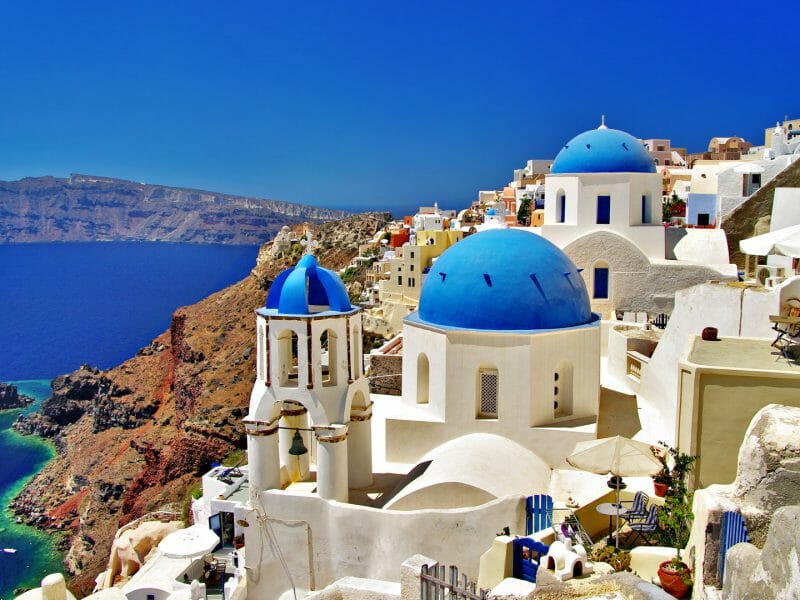 A picture-postcard island of dramatic cliffs, white-washed houses and stunning sunsets, Santorini is best viewed from the caldera basin by boat. 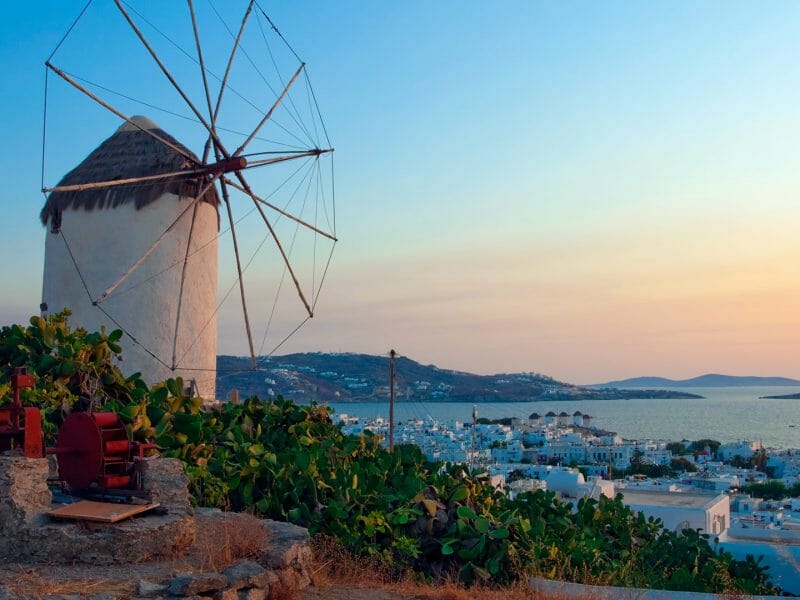 Explore the charming cosmopolitan centre of Mykonos town, one of Greece’s top destinations for fine dining and fun parties. 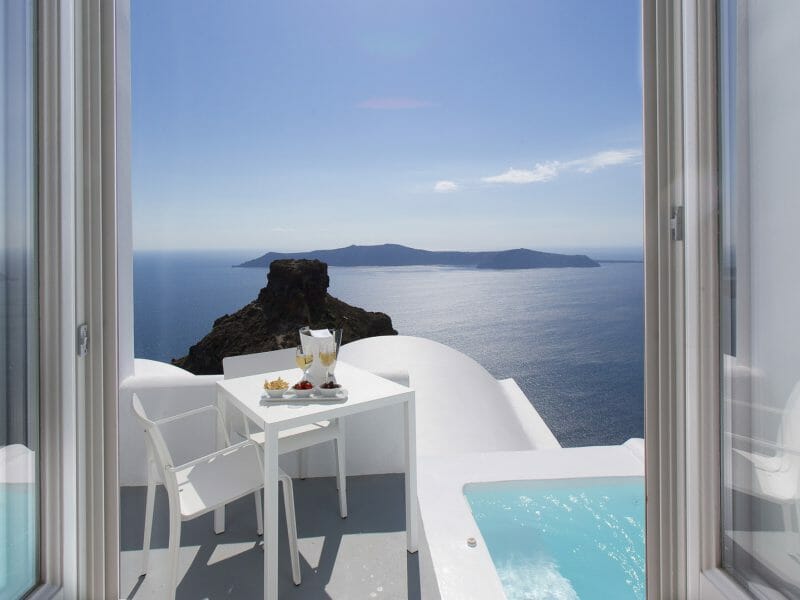 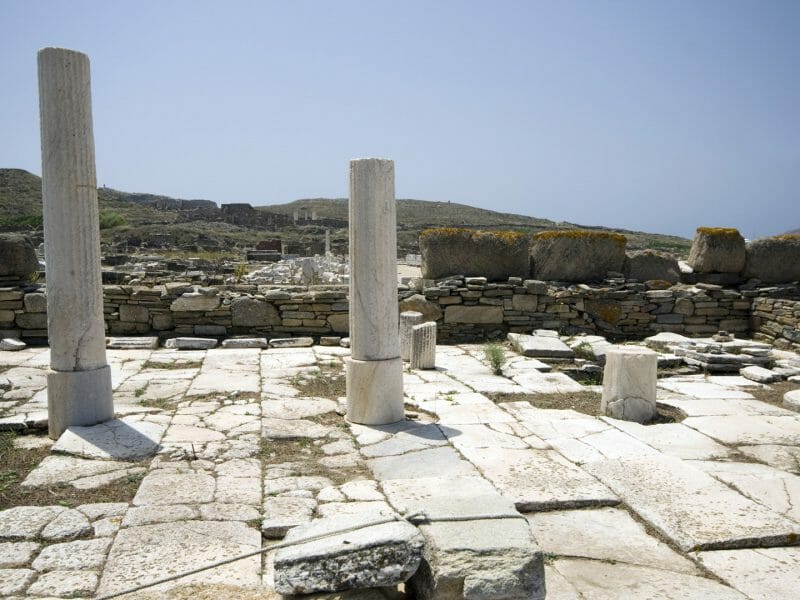 Reached by a short ferry this tiny uninhabited island is a World Heritage Site and one of Greece’s most important historical sites.

Mykonos and Santorini are the classic places to go in the Cyclades, with direct ferry connections, and helicopter transfers, these two destinations are easy to combine in one visit. Particularly good for honeymooners and romantic getaways, both islands offer a balanced mix of buzzing beach clubs and idyllic boutique hideaways, complemented by an emerging culinary scene hard to find on other Greek Islands.

Greece on your wishlist? Talk to our experts about tailoring this trip for you.

With beautiful sandy beaches, whitewashed villages and a vibrant, cosmopolitan nightlife, Mykonos is the perfect Greek island for a fun-filled and relaxing holiday.

Santorini’s cliffs soar out of the sea, covered with picturesque whitewashed buildings. Probably one of the most romantic Greek islands, offering some of the most spectacular sunsets you’ve ever seen.

How to Travel Between Mykonos and Santorini

Santorini and Mykonos, the most popular Greek Islands in the Cyclades, are less than 100 miles apart. The idea of island hopping between them seems like a no-brainer and, in some ways it is. We can arrange a seamless service between the two islands, which can be reached by fast ferry in just over two hours. Both Santorini and Mykonos have airports, although all flights route through Athens, which may feel like a detour during your holiday. If money is no object there are air taxi services that can be booked to travel between them.

Much to do on Mykonos

The cosmopolitan island of Mykonos has been a popular destination for many years and for good reason: great beaches, fine dining, legendary parties and beautiful people.

Chora, Mykonos’ main town, is the picture-postcard scene of 16th-century windmills, milk-white adobe churches and twist and turn down Little Venice’s alleyways. Take lunch with a view by the harbour – Little Venice by night is backed with revellers – if this is not your scene visit before dark.

Let Steppes Travel make it that bit more special and unique by offering several exciting experiences including a traditional Mykonian cooking lesson with Eleni in her home, or a family adventure with the local fishermen onboard a traditional boat trying your hand at fishing then barbecuing your catch. Moreover, you can board a sailboat to Delos, the birthplace of Apollo and Artemis or Kapari and Agios Ioannis.

The Many Shades of Santorini

Santorini is a volcano island that erupts with charm and beauty. Multi-coloured cliffs, picture-perfect sunsets and white-washed houses all play with the senses. Sail around the caldera to discover volcanic formations and hidden hot springs by yacht. Capture the island’s beautiful light through a lens with a private photography lesson.

Dine at the local bars and tavernas. One of our favourites is I Spilia tou Nikola, a small cave with historical background, now an award-winning taverna at the far end of the beach at Akrotiri. Whilst here don’t forget to uncover one of Ancient Greece’s most sophisticated civilizations at Akrotiri’s Bronze age archaeological site.

Take a Walk on the Wine Side

Make a visit to the Koutsoyannopoulos Wine Museum to discover how Santorini’s wine production first rose to fame in the Middle Ages when Italian nobility discovered the island as a hidden hotbed for production. In Santorini’s best wineries, learn how the island’s unique terroir and volcanic terrain lend to low-growing vines, a technique used to resist the Aegean’s island-sweeping winds. Sample the island’s most emblematic dry whites and full-bodied reds.

The Grace Hotel Mykonos is a small, intimate hotel of traditional architectural design and clean, contemporary interiors. The atmosphere is relaxed and informal but the service and attention to detail are immaculate. The hotel sits above a sandy beach, with lovely views across the Aegean Sea. A well-positioned swimming pool is a perfect place to relax and enjoy a cocktail while the sun goes down.

Grace Santorini is a luxury boutique hotel designed to blend perfectly with its spectacular hillside setting. From every room, there are breathtaking 180-degree views of the Caldera and the wonderful Greek sunsets. Many of the suites have private plunge pools and the award-winning Santoro restaurant delivers a memorable gastronomic experience. Although close to the main town of Fira, the hotel has a quieter, exclusive setting in Imerovigli.

Dimitris was first class, as a safe, smooth driver, a very likeable man and a wonderful foodie who always found us great restaurants.

This Itinerary
Price
From £2,300 Per person

In the mountainous regions of Greece, there is a possibility of snowfall during the winter months meaning travel to these regions can be difficult. However bigger cities, such as Rhodes, will be less affected and experience average temperatures of 14.C in January.

Travelling during February can be an ideal time to visit some of Greece’s archaeological sites with fewer crowds than during the summer months. Temperatures are comfortable for sightseeing but perhaps less suitable for sunbathing on the beach, when between May and September are the best months.

As the start of spring begins in Greece, it can be a great time to experience the country’s many outdoor activities, including its various walking and hiking trails. Depending on your exact location, average temperatures can differ. Travelling to Crete during March, you can expect an average of 15.C and so be pleasant for exploring the country’s largest island.

With temperatures averaging 19°C on mainland Greece, it can be great to explore both the countryside and the country’s well-known cites. Throughout the Greek islands, temperatures will also start to rise with more hours of daily sunshine.

Prior to the peak summer months, May is often classified as the â€˜shoulder season’ when temperatures are on the rise but there are fewer crowds and it can be much cheaper than travelling during July and August. May will experience little rainfall, lots of sunshine and temperatures can be expected to average 24.C.

June can be the perfect time to travel to Greece. Depending on your exact location, temperatures will average 26.C, there will be a higher chance of daily sunshine than previous months and it will be much quieter than during August.

During both July and August, Greece will experience its warmest temperatures with highs of 29.C. Humidity levels can also be particularly high with daily sunshine and clear blue skies.

August can be particularly busy in Greece due to guaranteed sunshine and the European school holidays. Accommodation can get booked up very quickly and will be generally more expensive than the start or end of summer. Temperatures will average 30.C in Athens.

With temperatures averaging 27°C, very little rainfall and fewer crowds than during July and August, travelling to Greece during September can be ideal.

At the beginning of October temperatures can remain high and the climate like that of September. However, as the month progresses, temperatures can be less predictable with some chance of rainfall in certain regions of Greece.

From November through to March, Greece experiences its coldest months and there will be less guarantee of daily sunshine. Particularly on the smaller Greek islands, some accommodation will even close during the winter period. On mainland Greece and on the larger Greek islands, such as Crete, they are less likely to do so.

The weather can be unpredictable in December and being outside of the peak season, accommodation prices will be slightly cheaper. However, some transportation services may be less frequent and certain activities unavailable.

Group tour
Greece
Ancient Epirus and beyond
This is a Greece tour with a difference, focusing not only on the great poleis or…
9 days from £3,695pp 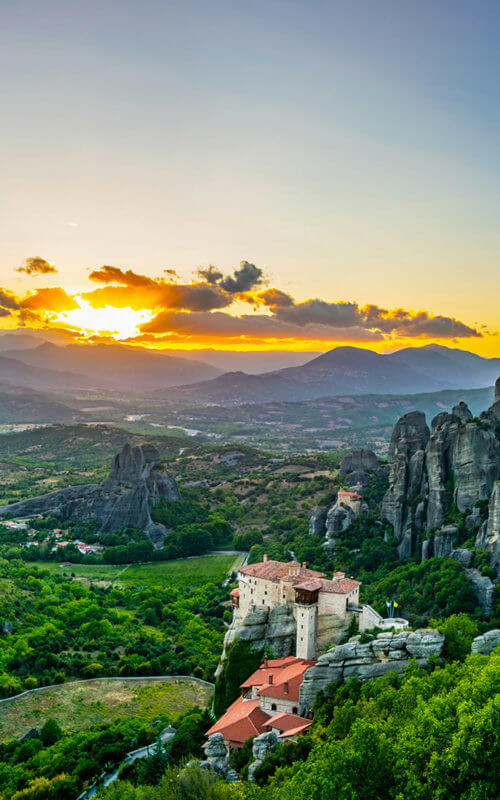 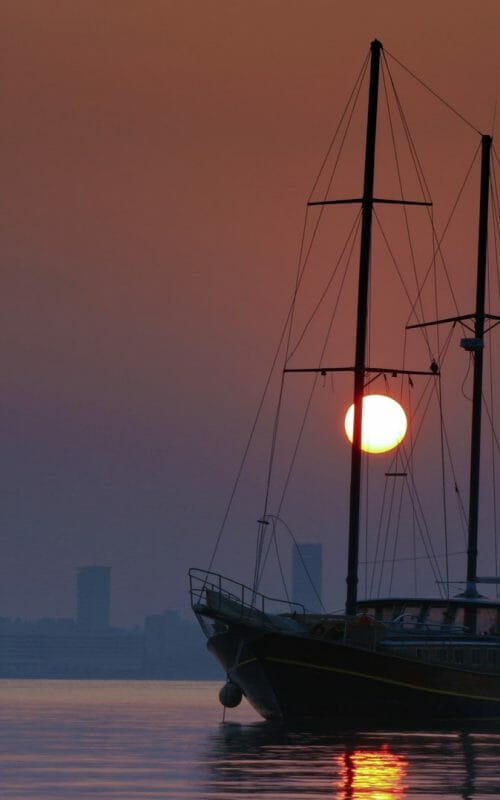 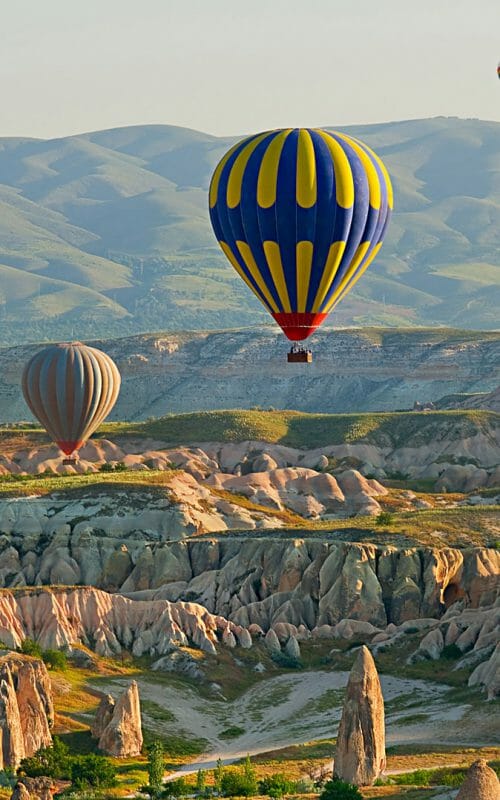 View Holiday Idea
Idea
Turkey
Eastern Turkey
Home to some of the most important and iconic archaeological sites found anywhere in the world,…
11 days from £3,050pp 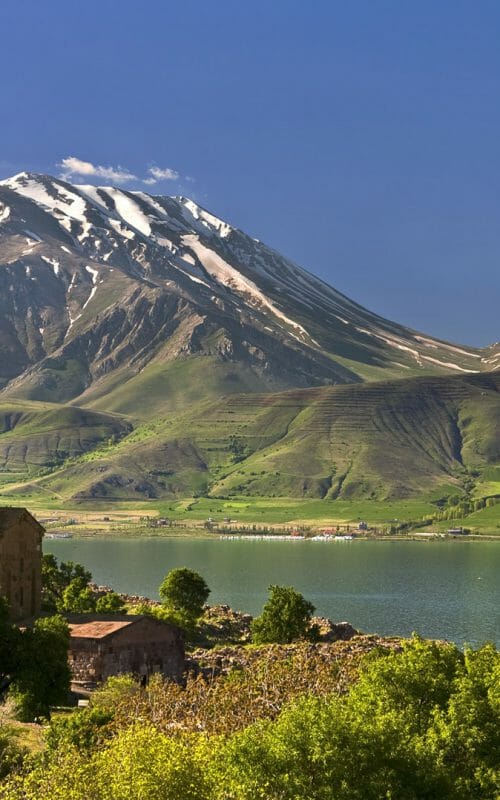 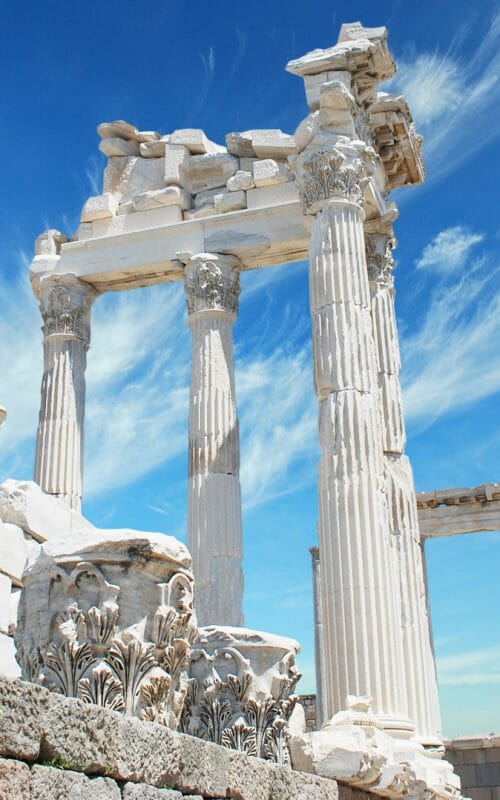 View Holiday Idea
Group tour
Turkey
Ancient civilisations of Eastern Turkey
Home to some of the most important and iconic archaeological sites found anywhere in the world,…
13 days from £3,195pp 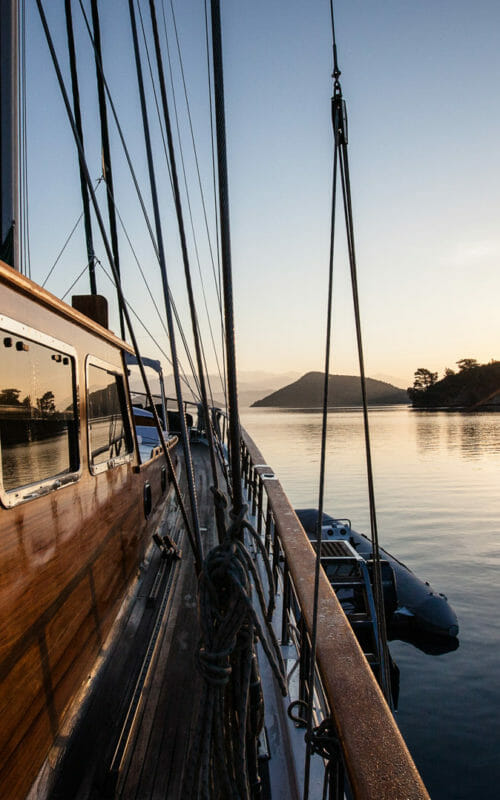 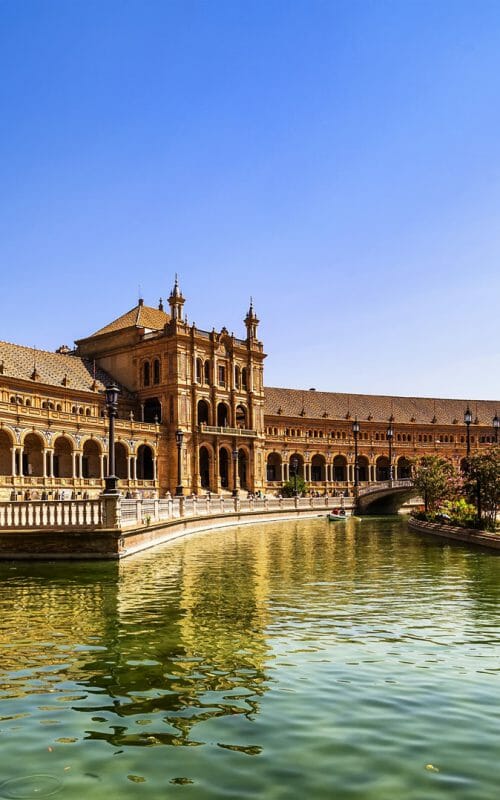 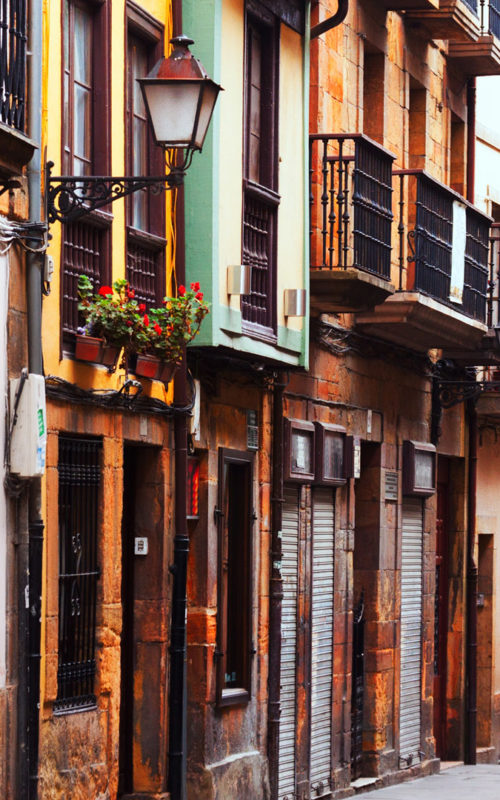