The Red Sea sits between Africa and Asia. Most famous for its turquoise waters and the fabulous underwater world it is a perfect area for a rest and relaxation holiday and also makes a great choice for some winter sun with a flight time of under five hours and balmy temperatures in the mid-20s between November and March.

The triangular peninsula known as the Sinai Peninsula is bordered by the Mediterranean to the north and the Red Sea to the south and has long been in the forefront of many a battle. Today, it has some of the best hotels and infrastructure in Egypt.

Essentially the Sinai is a desert that has little evidence of much domesticity or inhabitants; the only known inhabitants are the Bedouin people, who have lived there for many years. 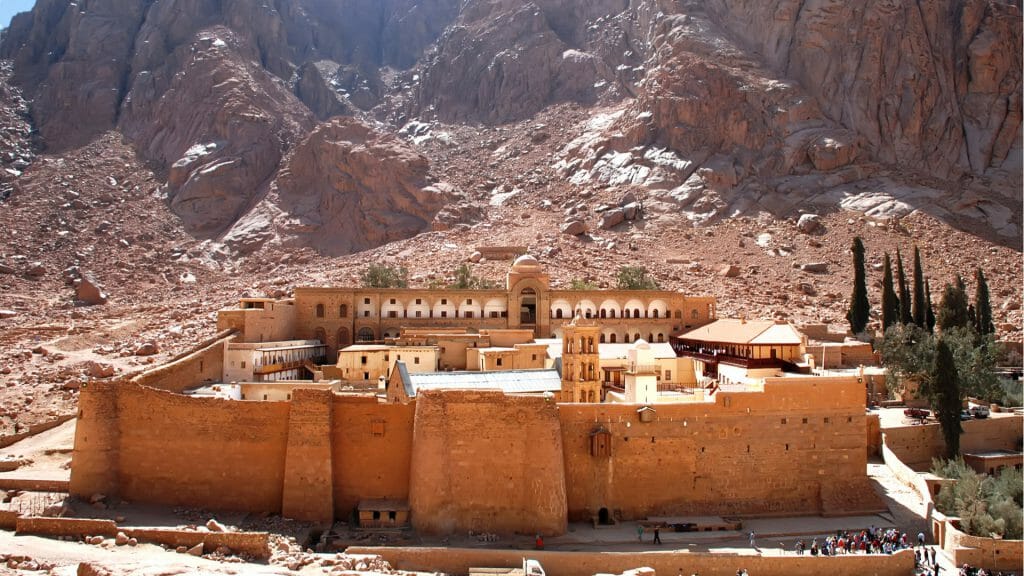 Visit the Monastery, home to the oldest surviving library in Christendom.

Relax at the Red Sea

Spend a few days of total relaxation in five-star comfort in one of the Red Sea’s magnificent coastal resorts.

Snorkel in the Red Sea

Dive or snorkel in the translucent turquoise waters of the Red Sea.

Climb Mount Sinai, a sacred mountain in both Islam and Christianity.

Explore the deserts of Sinai and spend time with the resident Bedouin.

Located on a hillside and surrounded by gardens, the Four Seasons Sharm el Sheikh offers 136 guestrooms and suites all of which boast either a private balcony or terrace and most have views of the Red Sea. Moorish in style the hotel is low rise and the guestrooms and facilities are scattered across the hillside which slopes down towards the beach and jetty. A choice of four pools, a spa and five restaurants, as well as a multitude of activities, make this a wonderful option for families or couples who want some time in the sun.

Oberoi Sahl Hasheesh is a luxury resort on the Red Sea Coast. The architecture of the resort is inspired by the classic Arabic designs of the region, creating an elegant and authentic feel with domed ceilings, sweeping archways and Arabic lighting throughout. Built on one level with spacious courtyards, the light and airy guestrooms and suites are spread across 48 acres. Eighteen suites have their own private swimming pools, most of which are heated in the cooler months.

Highlights of Egypt including a Nile Cruise

Egypt is arguably one of the most interesting countries in the world both historically and culturally, with antiquities of such scale and beauty to leave you speechless.
This holiday is the perfect introduction to Egypt and not only offers some very welcome winter sun but more than that, it is the atmosphere of Egypt that is so intoxicating.

Lake Nasser, otherwise known as the Nubian Sea in Southern Egypt is the world's largest artificial lake, formed following the construction of…

The Western Desert is a beautiful, diverse, interesting and mesmerising area of Egypt.

Aswan is as far south as you can go before entering the desert, Nubia and Sudan.

Cairo is a bustling metropolis, a cosmopolitan city, and not only home to the Great Pyramid of Giza it is the largest…

Home to some of Egypt's most visited and famous sites.

The second-largest city in Egypt, Alexandria, known as "The Pearl of the Mediterranean", has an atmosphere that is more Mediterranean than Middle…