Steppes Travel’s “international man of intrigue” parachutes into the wilds of Guyana – Land of Many Waters – to better appreciate the liquid charms of this little-visited South American Republic.

Dennis, my taxi driver from the airport into Georgetown, would be equally at home driving yellow cabs in Manhattan. A frenzied conversation turns an hour into five minutes as he fills me in on Guyana history, politics, his Portuguese ancestry and the weather in a gruff Caribbean drawl. Oh, and Dennis, don’t keep apologising for your language -your creative swearing punctuated your arguments perfectly.

Turns out that while I’ve been sat in a tin can, some unseasonably heavy rain has flooded parts of the city, closed schools and caused general mischief. But this is Guyana, a country at ease with being wet and the clapperboard wooden houses, hotels and city parks (all below sea level and protected by the Dutch legacy of a sturdy sea wall) survive to be re-painted, trade and bloom another day.

I’m here during the November “cashew rains”, the little brother of the two rainy seasons that have created a land swathed in primary rainforest and savannahs, bisected by the Essequibo and Demerara rivers and all of their tributaries. Just the one unpaved red-dirt road affords a bone-jarring entry into the interior, which is best accessed by light aircraft. Getting into the centre of Guyana is a challenge, deterring many, and the incredibly rich flora and fauna thrive as a consequence.

Ronaldo, our Nicaraguan pilot, is showing us his best moves today and treats us to a neck-craning overfly of the Kaieteur Falls, Before setting us down on a jungle airstrip. We’re treated to a few impossibly orange flashes of Guyana’s signature bird; The Cock of the Rock, the comb of which takes me right back to those preserved semi-circle orange fruit treats that granny always offered you at Christmas. Flippant observations are suddenly shamed by the no-nonsense, epic grandeur of a waterfall that simply sucks the breath from you. Legend suggests that the falls were named after Kai, an Amerindian chief who sacrificed himself by paddling over the edge of the falls in an appeal to the Great Spirit Makonaima to protect his tribe from the warring Caribs. 30,000 gallons of water a second tumble over the 400-foot wide horseshoe lip in a 741ft sheer drop, making this one of the world’s largest and most powerful single-drop waterfalls – 5 times the size of Niagara. All this in the most wonderfully isolated rainforest location, affording the visitor a real “Lost World” moment. Our group of 8 were the only visitors. This water monster was ours for a few hours while we appreciated the falls from various viewpoints and crawled on our bellies to the edge of a rock that overhangs the drop to stare into the boiling cauldron of the plunge pool below.

We celebrated an incredibly memorable day with a crafty shot or two of El Dorado rum (another Guyanese liquid highlight), barely containing our excitement at heading into the interior in the morning to meet up with some of the feathered and furred residents of one of the world’s most extensive tracts of pristine rainforest… 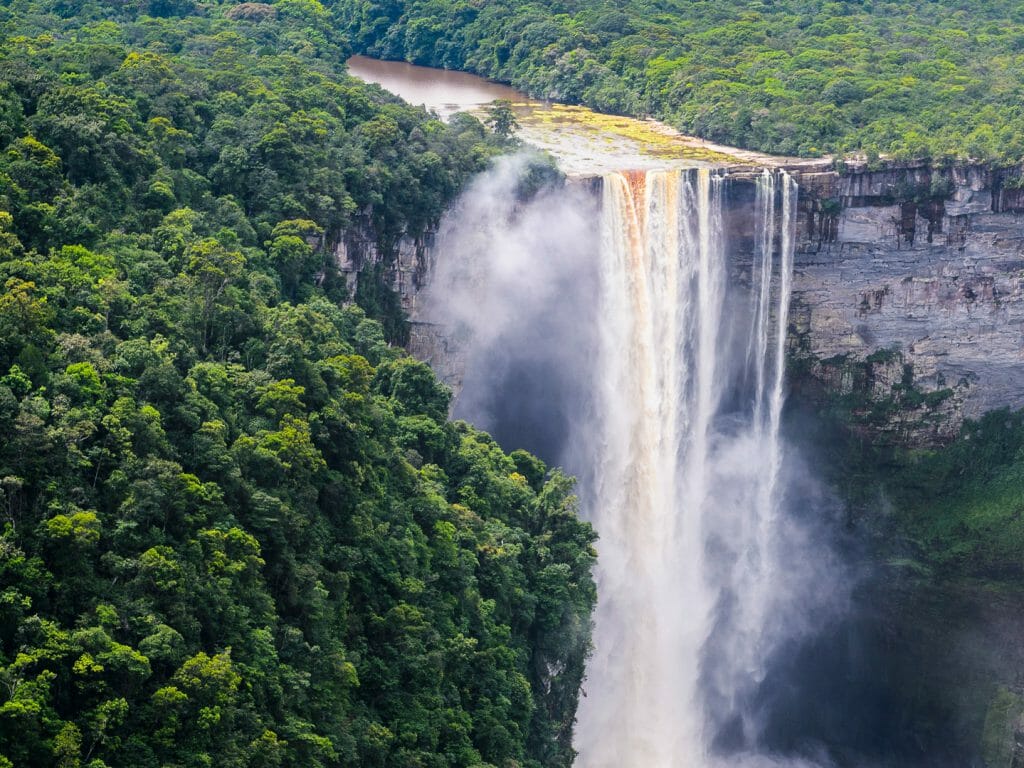 Stories
Wild Guyana!
Steppes Travel
WILD? THEY WERE ABSOLUTELY LIVID !!! "Let's carry on along the trail to see what else they throw at us". Kenneth,…
Read Article