When Shakespeare chose Illyria as the setting for Twelfth Night, he is said to have done so partly because his audience would have considered it to be a mysterious land, about which they would not have much knowledge. Little has changed in what now is Albania.

The name derives from alba, the Latin word for white, which describes the skin and hair of the Illyrians, a people who have since been superseded by the Romans, the Byzantines, the Venetians, the Ottomans and briefly by the Italians in the 1930s who built wide boulevards for fascist parades. In spite of these invasions, Albanians are warm people who are welcoming to foreigners.

After my initial shock flying into Tirana –  I am struck by the rugged beauty of the surrounding mountains – I was met throughout by smiles and warmth. Immigration was hassle-free, arrival easy – as everything was throughout my stay in Albania – and soon I was driving into the city.  No recognisable brand names adorn the billboards or shopfronts. Coca Cola was the first international brand in the mid-1990s but not many since, although all the cars are well-known European and Japanese brands, all new and shiny. There were only 15,000 cars in 1992 when the communist regime was overthrown. Now there are over 700,000 which makes for interesting roundabouts, not least as neither drivers nor pedestrians respect the rules.

Not only were private cars once the preserve of the politburo but so too were the expansive villas in an area known as The Block. In communist time the area was out of bounds for all but now bars, neon and glitz draw the crowds so much so that the streets were overflowing with young people – impressively so for a Tuesday night. The next day, I discover the neon bars of the night cover up and conceal the cracks in the façade of the concrete monotony of Tirana in daylight.

Albania is a tenth of the size of the UK, with an even smaller population – one million in the capital Tirana and three million in Albania. The double-headed eagle adorns the flag. It was the symbol of Byzantium, its two heads representing the fact that Byzantium looked east and west, the combination of church and state. Albanians have a penchant for poetic license, evidenced by the myriad of legends and the number of stories surrounding place names. My guide explained to me that the double-headed eagle signifies the continued resistance and survival. Something that the Albanian people have certainly shown over the course of history. Most recently under communism.

“We were all equally poor, although some were more equal than others,” he said with a wry smile. “But the real hardship was fear, suspicion and control.”

“We were brainwashed. I was so in awe of our dictator Enver Hoxha that in my young mind, I thought the world would end when he died. I asked my father, “What will happen when Enver Hoxha dies?” “He will never die,” was my father’s response. My father knew full well of the failings of Hoxha but did not want me to talk of Hoxha dying. He was saying that to protect me.”

The craziness of the communist times is illustrated by some of the plants en route along the Albanian Riviera. Cacti planted as a deterrent to invading paratroopers and olive trees to spell out the dictator’s first name: Enver.

My guide’s children don’t understand why their father and their grandfather did not speak up against the repression under the communist era. It is a time they cannot comprehend. Their generation has different issues to face such as applying for EU membership. Albania is having problems with its application; its lack of a skillful workforce, a feeble judiciary and unresolved issues over land ownership rank as just some of the obstructive factors. What is to be done in a transforming society where modern Mercedes share the country roads with horse and carts?

The history of Albania dates further back than scenes of bucolic bliss. The incongruous new entrance gates of Apollonia are a flashy sign of expectant optimism for the future of tourism in Albania. At its height in the third century BC, Apollonia would have had a population of 35,000. It was an important trading and military port but also a seat of learning – the young Octavius studied here. However, a series of earthquakes shifted the course of the Vjosa River, leaving Apollonia both high and dry, literally and metaphorically.

The ruined ancient city sits isolated on a hill-top with great views of the surrounding plains. The Bouleuterion is what draws the eye and crowds but there is also a little theatre, the Odeon, and the remains of a monumental arch. The busts and vases that once would have adorned Apollonia are now housed in the museum, itself housed in what was a monastery. The stone, bricks and columns of the monastery and thirteenth-century church are all repurposed from the ancient city of Apollonia.

The faded frescoes have an intriguing beauty about them although sadly many of the faces have been scratched out. The communists achieving in fifty years what the Muslim Ottomans did not in nearly five hundred years.

The beauty of the site is not just its remains but its setting and surrounds. Birds chirp gaily, there are rosemary and sage bushes: it is very peaceful and tranquil – perhaps that is why there are so many tortoises.

We head further south along the Albania Riviera where limestone mountains tumble into crystal-clear waters. It is not just the sea that is clear – so too are the villages and beaches en route. This, however, is changing fast as evidenced by the glittering lights and thumping bass of Saranda, the once quiet and attractive port, which is just a few miles from the Greek island of Corfu.

Half an hour south of Saranda is Butrint, the most visited site in Albania. Butrint sees several hundred thousand visitors a year; in comparison, the Acropolis, the most visited site in neighbouring Greece, sees one million visitors. An idyllic island surrounded by a lake, it is easy to see why the site was so popular over the centuries from the early 6th century BC settler to the Romans, from the Venetians to Ali Pasha in the nineteenth century. Indeed, Cicero wrote of it, “Let me tell you that Butrint is to Corfu what Antium is to Rome – the quietest, coolest, most pleasant place in the world.”

Understanding the history of Albania is all about geography as becomes clear as we arrive at Antigone. The site is very picturesque — on a deserted hillside in the middle of nowhere. Once the home of King Pyrrhus and some 150,000 inhabitants, the site was ransacked and destroyed by the Romans reducing it to knee-high archaeology. The foundations that remain were brought to life by the expertise and explanations of my tour leader Carolyn Perry. As she explained, because Antigone was not built upon by subsequent civilisations, it is a snapshot in time. Further archaeology could possibly provide the answer to finding out just who the Illyrians were.

Nearby is Gjirokastra, an attractive old town of cobbled streets and traditional and beautiful nineteenth century houses characterised by their heavy slate tile roofs. Perched above the old town is a castle that was rebuilt in the nineteenth century by Ali Pasha. The castle with its commanding views is imposing and brooding. Completely at odds with the relaxed friendly charm of the streets below and the humour of the signs. One sign on a grassy verge housing several cannons at the Castle in Gjirokastra reads, “Please don’t stand on the grass – it is protected by cannons.” Another, outside a restaurant, reads, “Skinny people get kidnapped. Come in and enjoy a good meal.” Equally, Albania’s reputation is at odds with the reality. 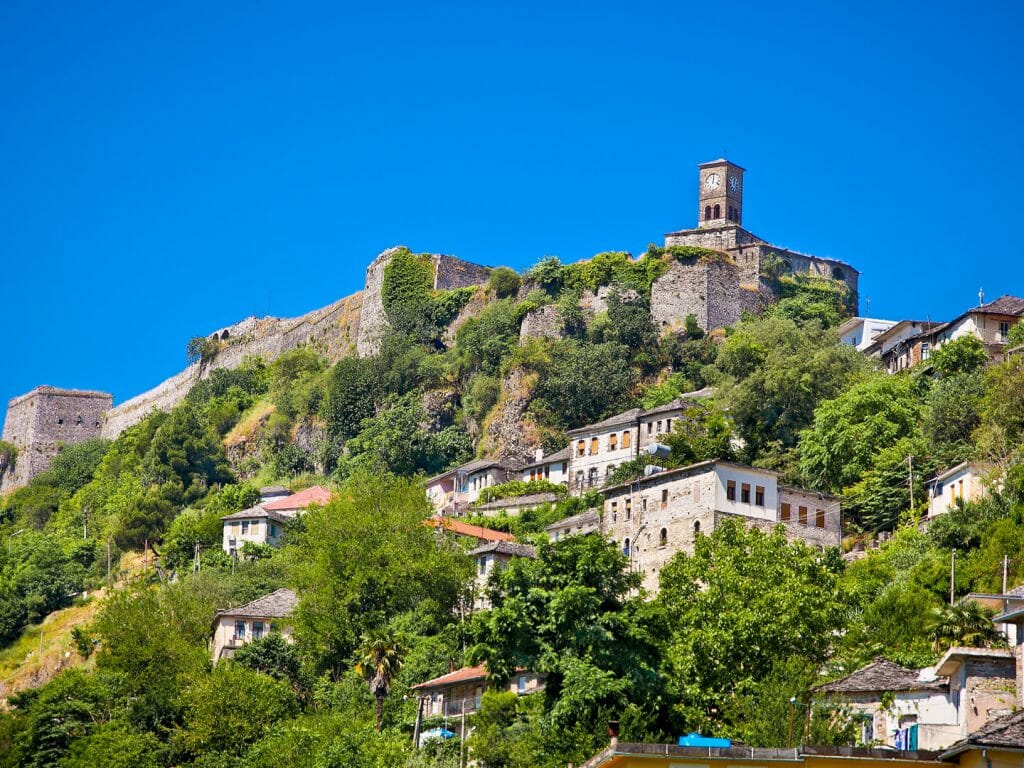 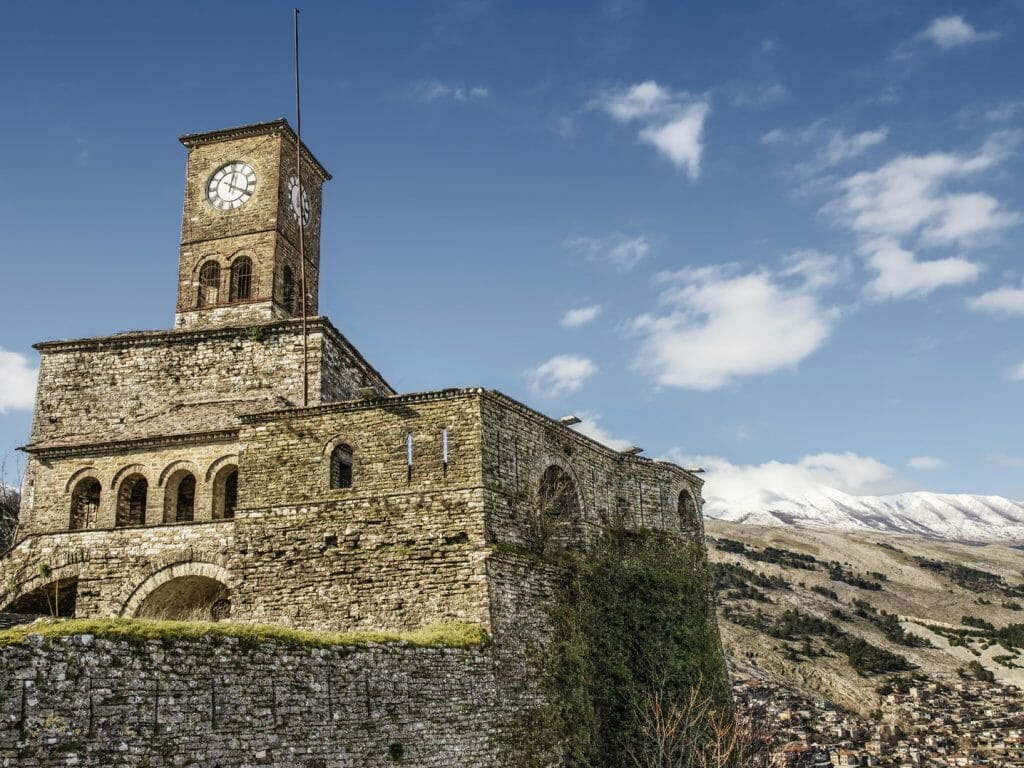 Stories
Albania Holidays – Confounding Expectations
Steppes Travel
Expectations had been low even before I set foot in the country. It wasn't just me, many of my friends and…
Read Article