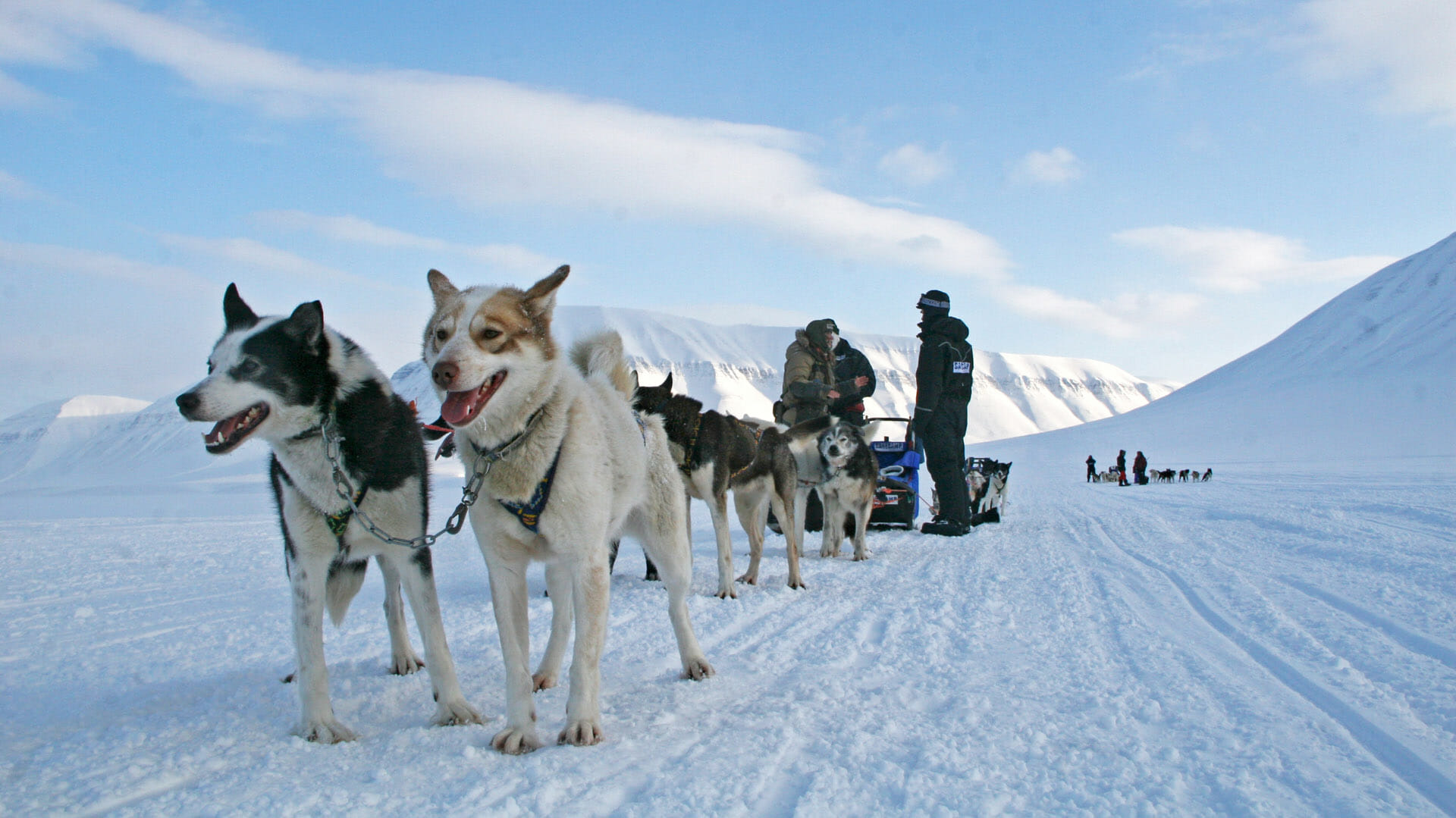 The air is charged with the sound of howling huskies. My foot quivers on the snow brake. The dogs in front of me strain against their harnesses.

It’s not a moment for misgivings or second thoughts: either you hold tight as you release the brake and the dogs snap forward, or you’re left behind as the sled races out into the open. I choose to hold on; this time at least.

Already charged with adrenaline, I’m prepared for the rush of euphoria that accompanies our first leaps across the snow, but I wasn’t expecting the silence. One moment, the orchestrated chaos of nose-to-the-sky howls; the next, it’s utterly hushed except for the crunch of snow beneath the runners.

We had flown into the sparkling whiteness of Svalbard, blissfully unaware of how far north we were coming: there were gasps on the plane when we realised that the distance from Oslo to Longyearbyen was almost twice that from London to Oslo. We were well within the Arctic Circle and thus the archipelago seemed deserving of its name – Svalbard means cold shores.

Whilst we received a frosty reception in terms of temperature – it was -10 – that of the inhabitants of Longyearbyen, the world’s northernmost town, was far from so. Longyearbyen is a strange but likeable place where all roads come to an abrupt end. The road signs here don’t warn against anything as tame as sprinting deer; no, they depict the unmistakable silhouette of a polar bear – a reminder of who rules the roost in Svalbard.

This is a place where the cute but fearsome predators outnumber the 2,500 residents, and while they occasionally wander close by, sightings are actually rare. But that doesn’t stop most locals from slinging a gun over their shoulder whenever they venture beyond the town.

Hence few raised eyebrows were raised the next morning when we met our two guides. Softly spoken but controlling, Kristen radiates a calm energy that transmits palpably to her dogs, which visibly adore her. Therese is phlegmatic and controlled but with a dry sense of humour and great smile. Both carry rifles. One smokes a pipe.

We pull on our snowsuits and over-sized boots and waddle out to meet the dogs. They are a mixture of traditional white huskies with piercing blue eyes with smaller, black Norwegian huskies. The dogs are adorable, bright-eyed, sleek-coated and frisky. They snarl at each other but are pushovers with people.

We are given a briefing. It all seems rather straightforward. Father Christmas-style sleds are dragged out, teams are allocated and a bundle of harnesses handed out. I approach my lead dog, Oscar, remembering the etiquette and order in which you must go to your dogs. And then my mind goes blank. I’m confronted by a jumble of straps and indecision. Back to Kristen to ask for help. I have to join the queue of my similarly confused colleagues. The huskies meanwhile run in circles around their huts, barking, yelping, howling in anticipation. It’s chaos.

After what feels like an age, the dogs are paired and matched to their sleds – each of us drives our own sled, pulled by six dogs – and we’re ready to roll. They are making even more of a racquet now, straining on the ropes. Finally, we get the signal from Kirsten, I raise my foot, the sled hurtles forward, the canine chorus abates, and we’re off.

Silence. We fly out of the gate and suddenly I get it. It’s the most amazing feeling, gliding through this fairytale land where everything is pure and white and glittery. The world looks like it’s been frozen forever.

Kristen stops after a few hundred yards. Not fully paying attention, nor fully aware of our stopping distances we end up stopping alongside each other incurring her wrath. Another fetish ticked. Suddenly a team of dogs shoot past the line minus anyone at the helm. Their rider follows, head hung low in the walk of shame. Much laughter and a lesson learned.

We travel in single file, with Kristen up ahead, dead cool, listening to her iPod. For the rest of us, the world is silent, as if someone’s pressed the mute button. It is utterly, unnervingly still too. There’s no breeze, nothing.

I try to synchronize my movements with hers as we lean into turns and she calls out commands: “Gee!” (go right) and “Haw!” (left). But my dogs seem unresponsive to my commands. I put aside any aspirations of dog sledding greatness and settle instead for enjoying the spectacular and staggering scenery that surrounds us on all sides.

Tails waving and tongues lolling, the huskies settle into a steady pace. Their running styles are very different: Oscar a little off centre, Luna crab-like, Thor straight as a die, Tusker a staccato trot, Shadow almost a gallop and Siko at best ungainly. One of the joys is getting to know the personalities of the dogs. Like humans, they’re all different. Some are wild extroverts others shy. Some like to lead, others prefer positions in the pack.

As the sun is setting (it will not get fully dark) we descend with some trepidation onto the sea ice. Kristen has put the fear of God into us about the difficulty of stopping on ice. One boot floats above the snow brake, poised to punch its metal teeth into the ice in case of a tangle. Thankfully the dogs ignore the occasional seal enjoying the last of the sun by their seal hole; having sighted the tall masts of the Noordelicht, a two masted schooner frozen in the sea ice, they are intent on getting home.

We’ve arrived. We’ve survived. We’re knackered. Standing on the back of a sled for hours is surprisingly tiring. But chores come first. We have to unharness the dogs and then chain them up in teams. Much to our collective surprise they sleep outside.

“Do the dogs not get cold?”
“No they are hardy and can easily survive these temperatures. In fact you might have seen some of them rolling in the snow whenever we stopped. That was because they found it too hot and were using the snow to cool down.”
“What about polar bears?”
“If the dogs smell or sight a polar bear they make a huge racquet. Normally this will scare a bear away but we will always come out just to check on them.”

Even more impressed by the dogs it was time to reward them with some food. Blocks of frozen meat cut with a chainsaw and then seal blubber to follow. Whilst this is a high energy diet it does have its consequences on the dogs’ bowels and hence throughout the day they defecate. Kirsten had warned us that “You need to go slower when they poop” but all of us seemed to have at least one dog that was royalty and insisted on stopping when the need arose.

The Noorderlicht is a warm refuge. The cabins are small and cosy – just right, anything more would seem out of place on this surreal adventure. Dinner is wholesome, conversation is fun and amusing as we reflect on the day “Formula One start”, “White silence”, “Stunning scenery”, “Amazing Light”, “Dog shit”.

The next day we wake to glorious sunshine further embellishing the fantasy. Same routine: the dogs go bonkers, barking for 45 minutes until we finally set off. A day driving the sleds has made us more confident, but no more adept. But it doesn’t seem to matter as the sun is so brilliant, the scenery uplifting and invigorating, the blue of the glacier that we go to visit dazzling.

We see a phalanx of snowmobiles, headlights on, their black shapes look ominous and menacing against the backdrop of white, as if from the set of Mad Max. They seem ugly and vulgar in comparison to the character of travel by dog sled. We all take the moral high ground against snow mobiles although once back in Longyearbyen resolve crumbles and we head out on snowmobiles to discover that whilst they are comparatively short on personality they are long on adrenaline.

We didn’t see a polar bear – lots of snow and rock bears however. Perhaps this is unsurprising when you consider that there are only a few thousand bears and Svalbard is half the size of the UK. Whilst it would have been thrilling to see a bear it is not disappointing not to have done so; the privilege is spending time in such a dazzlingly pristine and staggering wilderness. To make it all the more special I was able to do so with some great friends.

And thus whilst I will miss the lurch of the sled and the thrill of being pulled into that soundless, white world, it will remain with me forever.

Stories
81.38 Degrees North
Lara Paxton
10 years since my first visit to the beautiful Svalbard archipelago, I was excited yet apprehensive about returning. Tourism has increased…
Read More

Stories
Ice, ice everywhere but not a bear in site
Sue Grimwood
In September I headed deep into the Arctic ice pack off the coast of Spitsbergen aboard the sturdy M/V Plancius in…
Read More

Stories
Heading Home from Iceland
Steppes Travel
19 Aug This morning we had a landing in the little village of Ittoqqortoormiit; it was strange to see other people…
Read More

Stories
Polar Bears and Fin Whales in the Greenland Sea
Steppes Travel
10 Aug I wish I could photograph or somehow capture for you the exhilaration I’m feeling at this moment. I’m lying…
Read More

Stories
Spitsbergen, Greenland & Iceland adventure
Steppes Travel
It’s the first full day of my expeditionary voyage of the  Arctic and what an incredible day! We were told at…
Read More

Stories
Northern Lights
Steppes Travel
With next year being touted as being a great year in which to see the Northern Lights (Aurora Borealis), here’s a…
Read More

Stories
80 Degrees North
Steppes Travel
I have to admit, when I think of a holiday I think sun, sea and sand, never had I thought of…
Read More

Travel
Polar Bears from the inside out
Sue Grimwood
For anyone with the vaguest interest in polar bears, don’t miss the upcoming Thursday nights Inside Nature's Giants at 9 pm…
Read More