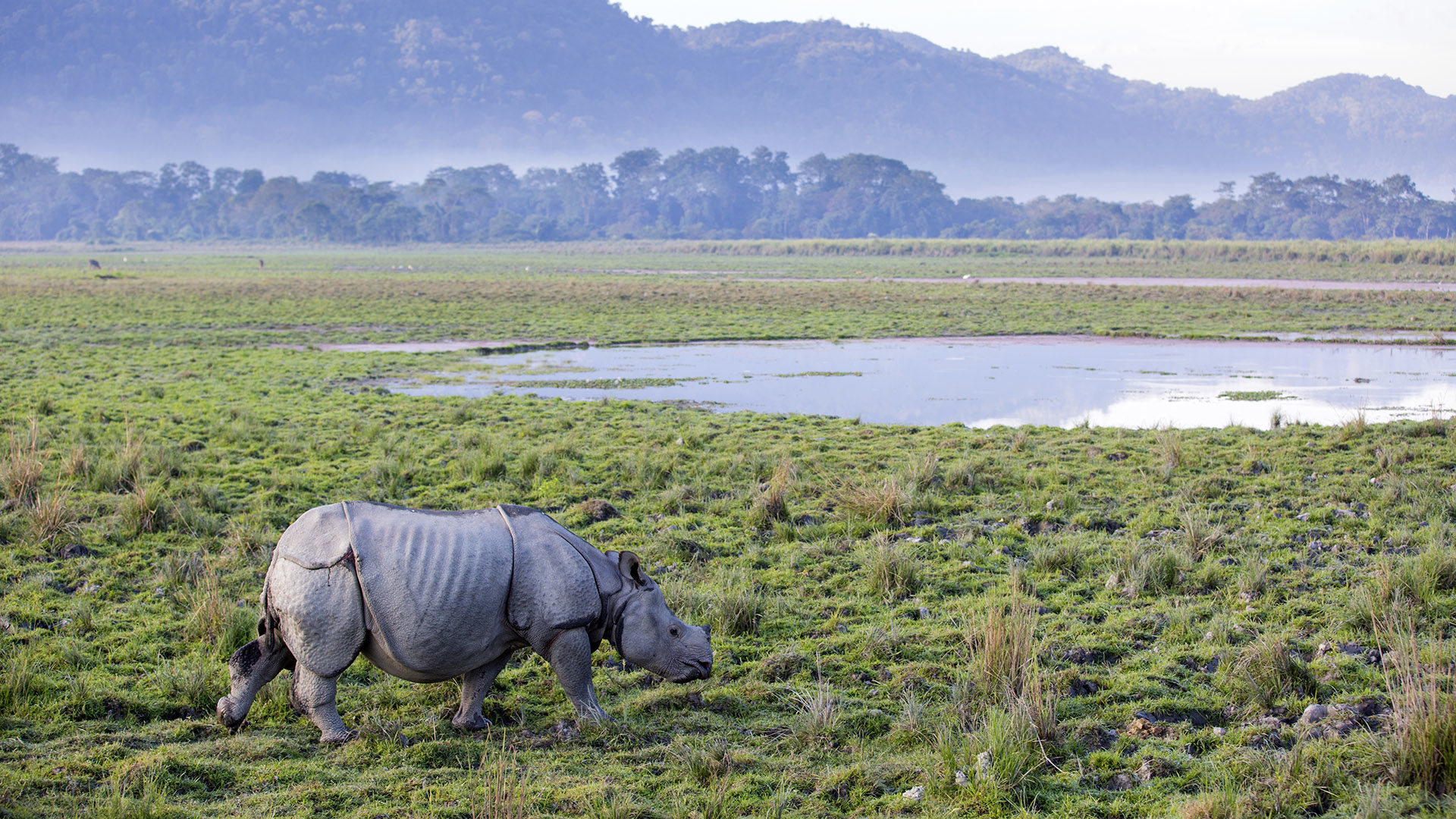 Kaziranga is in the north-eastern state of Assam; it is famed for its one-horned rhinoceros and the density of its tiger population: here there are more tigers per square kilometre than anywhere else in India. However, due the fecundity of its flora, sightings of the latter are harder to come by but that is no reason not to go there.

Kaziranga is a child of the Brahmaputra River valley and its 430 square kilometres are a unique mix of grasslands, semi-evergreen, tropical, mixed deciduous forests, swamps, wetlands and sandy chuars that create a diversity that is a wildlife haven. I quickly see the dotted spots on the back of one hog deer and the softness furriness of another’s new horns of another, a boar wallowing contentedly in the mud and elephants foraging in the undergrowth.

Everything is green, whether it’s the tall elephant grasses that rustle noisily in the wind or the jungle of ferns, bromeliads, lianas, vines and orchids a month or so away from flowering. Forest authorities have subjected occasional swathes to controlled burning and here the regimented stripes of the burnt grasses stand in contrast to the lush green and look like a conifer of porcupine quills.

Everywhere I look, I see the casual browsing of rhinos. They are nonchalant and unperturbed by the attendance of the ubiquitous egrets and swamp deer. The flick their ears occasionally, oblivious to the perils that face their kind, the trophy on which they carry on their nose.

Lady Curzon allegedly travelled to Kaziranga in the early twentieth century and chanced upon the unfamiliar footprint of a species she had never encountered before. Asking what animal this was she became fascinated by the description from locals – how do you describe a rhino to someone who has never see one, even in this modern day and age, let alone over a century ago – and was told that it belonged to a four-legged animal with a horn. Little wonder that its Latin name is Rhinoceros unicornis.

The grey silhouettes of rhinos, many sleeping on their haunches, dot the landscape as far as the eye can see. Buffaloes rest their heavy horns on the green grass; this is a time of laziness, even indolence. The monitor lizard is unmoving, reptilian in its repose. The tiger is nowhere to be seen.

Everything is still. The turtles which have lined up on a log in the river are motionless. The landscape is imbued with a soporific feel. A leaf flutters noiselessly to the ground. The tiger sleeps, unobserved.

It is a time for birds. North-east India is home to more than 850 species of birds. I don’t count every bird that I spot but I do see Asian open-billed stork, green bee-eater, osprey, serpent-headed eagle, black-necked crane, pelicans and darter, locally called the snake bird for the way in which it swims through the water.

The fluttering flight of the pied kingfisher before it smacks into the water, unsuccessfully, only to resume its hovering vigil to knife into the water once more. The darting flight of the drongo. A heron peers from the parapet of a treetop, surveying the landscape. A grey headed fish eagle circles for prey. It is rare to see the common kingfisher.

The call of the barbet, the whistle of the oriole, the cry of the eagle, the crash of leaves as the jungle fowl ploughs through the undergrowth.

The resplendent red of the fowl’s plumage. The flash of yellow wings from an oriole. The green of an emerald dove as it flies low through the forest. The dazzle of blue as a kingfisher darts along the river.

A female hornbill is glimpsed. Or rather her bill as she cleans her nest in a hollowed-out part of a tree. Nuts or berries – the remains of her food provided by her male partner as she prepares her nest for the imminent arrival of their young – are dropped one by one out of the hole. It was comical yet fascinating to watch. Glimpses and insight proving that it is not about the picture postcard image but the experience.

The tiger evades me once more. My search continues. My fascination undiminished.