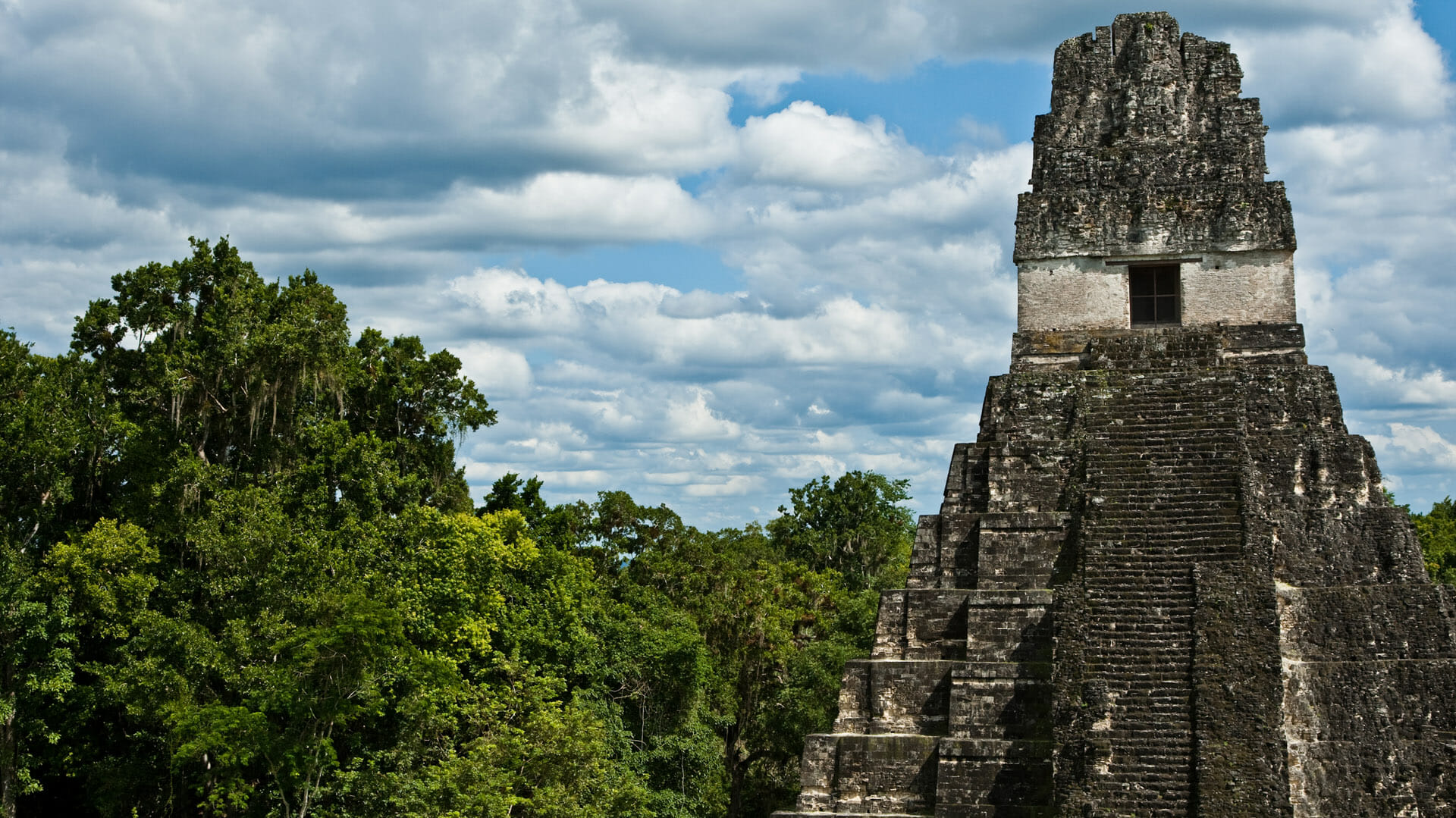 Home Blog Guatemala Holiday: The Lost World of the Mayans

Guatemala Holiday: The Lost World of the Mayans

I was in Peten, a 36,000 square kilometre – a third of the national territory – province in the north of Guatemala. At first glance there is not much to the province: only half a million people, lots of forest and few roads (when the airport was moved to Flores in 1974, Peten’s first paved road was built and it remained its only paved road built until 1998). However hidden within the jungle are hundreds of the most compelling ancient monuments to the Mayan way of life.

The first site I visited on my Guatemala holiday was Uaxactun, which means ‘eight stones’ in Mayan. Uaxactun is post classical Mayan and predates its famous counterpart Chichen Itza ‎in Mexico. The site is believed to contain 17 layers over 1,700 years from 800 BC to 900 AD.

Uaxactun has a number of individual merits. The royal chamber is the highest in the Mayan world. ‎Its three astronomical pyramids date from 700 AD and are the earliest use of the astronomical calendar in Mayan buildings. As a result any astronomical compound in a Mayan site is called E in reference to E group, the archaeologists’ name for the-pyramid complex in in Uaxactun. In spite of these accolades, for me the charm of the site is in its whole.

The silence is engrossing as we walk through Central American cedar trees, palms and copal (incense) trees. Horses graze amongst the depressions that would have held water in Mayan times. Grass covers the paths that in the Mayan era would have been compacted earth.  The limestone rock has faded, white replaced by a dull grey that lends an old-world charm to the site. Limestone is easily eroded – in comparison the volcanic rock of Copan in Honduras contains some of the best preserved Mayan reliefs.

Carlos, my guide, explains, “Uaxactun is a consolidated site. What I mean is that the archaeologists left it as they found it. They simply cleared the earth away. Uaxactun is not a reconstructed site.”

The architecture is rough. It has a simple charm. History under your feet. Mounds covered in foliage and gnarled trees lie untouched. Anywhere but Guatemala and they would have been excavated.

Maybe so much has been left untouched as the first excavations by the Carnegie Institute in the 1920s caused so much damage. Borne out of frustration that the temples and buildings were covered in so much earth and foliage – essentially they were treasure hunters looking for a quick win – the Carnegie Institute team used dynamite. They literally blew the tops off several of the temples to devastating effect. To add insult to injury they left many of their ‘excavations’ uncovered and thus when it rained most of the paintings were washed away. Some were over 2,000 years old.

Red was the colour of the Mayans. Red represents blood and the sun and thus the buildings, temples and pyramids were all painted red. Red comes from cinabar – volcanic rock that when heated liquefies producing red colour and also liquid mercury which was injected into the veins of the dead. The practice is still used by shamans to this day. Families come and sit with the dead and talk to them. The Shaman uses a hollow finish bone to inject a shot of mercury into the vein causing the body to jerk and thus create the illusion that the body is responding to what is being said.

I needed no such stimulant en route to the late classic site of Yaxha.

“They are two more Mayan sites. Naranjo is bigger than Tikal but it is difficult to access and has simply not been excavated.”

I shake my head in disbelief. Disbelief at the extent of the Mayan world hidden around us. As if to illustrate this point, Carlos stops the car to point out that we driving through a temple and burial mound –

Yaxha means green water. We arrive to a fecundity of the forest, dripping leaves and silence. Once there was a population of 40,000 at Yaxha. Now there is no one – incredibly, we have the site to ourselves.

I get a huge buzz, a privileged thrill at having this site to myself. I climb the prosaically named Temple 16, a heavy solid structure of the late classic period being built in 766, and gaze in awe across the nearby lake and surrounding scenery. At the acropolis, I sit in silence trying to fathom its history. The acropolis dates from 700 BC to 900 AD – an impressive span.

Such solitude is not going to happen at Tikal which receives 700,000 visitors a year. It sounds a lot but on the day that I was at Tikal, there were little more than two hundred visitors. Thanks to Carlos’s knowledge, his guile and his avowed intent to give his clients the most personal experience possible, I only came across a handful of other tourists.

Before we start out I try and gauge Tikal’s popularity by asking Carlos, “Why is Tikal so popular? Which is your favourite Mayan site?”

“El Mirador is the largest with a population of about 250,000 but most of the site is yet to be excavated. For me the most impressive is Tikal. By far.”

But this has not always been the case. For centuries Tikal lay unnoticed, consumed by the forest and known only by a few locals. It was rediscovered in the 1840s when it was given its name, “the place of voices”. In 1882 Alfred Maudslay, a British colonial explorer,  burned the trees and undergrowth to allow for better photographs and in so doing ruined all the paintings of the temple. It was not until some seventy years later that the full extent and scale of the lost city became known as the University of Pennsylvania began a huge project of mapping, excavating and renovating the site from 1955 – 1969. In 1976 Tikal appeared on the front cover of Hergé’s ‘Tintin and the Picaros’ and in 1977 it was used as a filming location for Star Wars. In 1979 it was declared a UNESCO world heritage site.

There are thousands of ancient structures at Tikal and only some 18% have been excavated. The most prominent excavated buildings include six large pyramids, labelled temples one to six during the early survey of the site. It is difficult to comprehend the scale of the site, hard to appreciate that only a fraction has been unearthed, not easy to come to terms with the range of history or differentiate between the diverse styles or periods – Tikal’s apogee was from 200 AD to 900 AD – and then the archaeologists have to confuse matters by naming the temples in a sequential order that bears no relation to history.

The tallest temple pyramid in Tikal is Temple 4. Built-in 771 AD, Temple 4 towers seventy metres above us poking its stone top through the forest canopy. A walk to the top via a wooden staircase reveals how hot it is and sweeping views of a green carpet of forest dotted by the occasional Mayan temple.

As we walk between the complexes, Carlos points out features that I would have missed. “Here is one of the kilns that the Mayans would have used to fire their pottery,” and “This is a silo. One of 850 silos that each would have contained a ton of corn.‎ The Mayans were good agriculturalists.”

The Great Lost Pyramid was built in 200 AD some 500 years after Uaxactun but some 500 years before Temple 4. It is difficult to comprehend the stretch of time over which the Mayans held sway in the region. It is hard to appreciate this pyramid’s epithet.

Temple 3 was the last temple built in Tikal. It is dated at 810. The ninth-century saw the decline of the Classic Maya period with the last hieroglyphs in Tikal bearing the date 889. The reasons for the collapse – drought, deforestation, overpopulation – are disputed but what is clear is that it was swift. A powerful dynasty that held sway for almost a thousand was reduced to squatters living in thatched huts in decades – pottery has been carbon dated by archaeologists to show that in 1200 there were still living a handful of people living in Tikal.

Trying to imagine a population of 120,000 at Tikal’s heyday is not difficult walking around the Temple of the Seven Pyramids. It commands a large plaza of some sixty by seventy metres that most have been hugely impressive in its pomp. Today it is filled with peace and tranquil and thankfully not many visitors – curiously it is bypassed or perhaps just plan missed by many.

We move to the next section taking tiny paths clearly not used by the majority of visitors to Tikal. Such hidden trails give us a sense of privacy and the privilege of a unique perspective.

In front of me towers Temple 5. A unique design and the only temple facing north to Mexico, the most striking feature of Temple 5 is its height. At 57 metres it is the second-highest structure at Tikal but arguably the most impressive vertically. Yet in spite of its height, it was only excavated recently from 1996 – 2002. That is what I find so bewildering, so awe-inspiring about Tikal: there is so much we do not yet know, so much more for us to find out.

Standing in the residential palace, my imagination runs riot trying to grapple with what it would have been like. Once the stone would have resounded in noise – the acoustics are astonishing – now they stand in stony silence. It is the largest residential palace ever excavated in Meso-America. The excavation took fourteen years. 1,100 people would have lived here with a communal kitchen and communal courtyards for families.  I sit on some steps and watch out over the palace doubtless as the nobility would have done centuries ago.

Yet there is more as Carlos again asks me to look down and keep moving forward. It’s all about first impressions and creating that wow factor. But it works and I gasp in surprise at what lies beneath me. Hours after arriving at Tikal, hours after discovery after discovery, of one highlight to the next, I arrive at the most remarkable and exciting of them all: the Grand Plaza with the Temple of the Masks and the Temple of the Grand Jaguar facing each other.

The rain comes down and grey breasted martins take to the air swarming after insects.