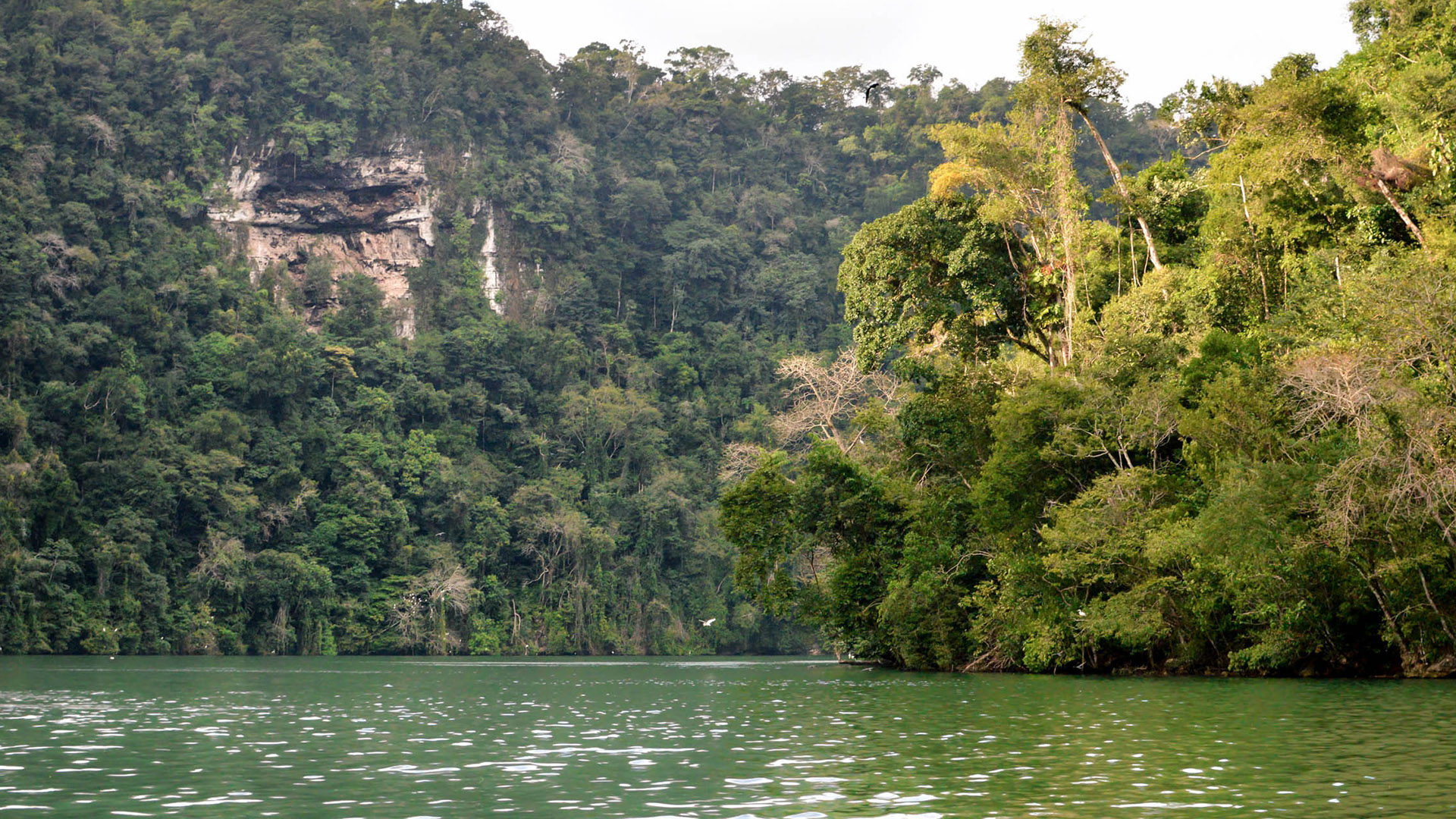 Home Blog Borders on the edge

Borders on the edge

Castillo de San Felipe de Lara, a sixteenth-century Spanish fort, proudly guards the mouth of Lake Izabal, the largest body of water in Guatemala. From here I head downstream down the Rio Dulce and through the scenic Rio Dulce Canyon to the small port of Lívingston and the Caribbean Sea.

Rio Dulce is a riot of vegetation. Dense tropical rainforest tumbles from the towering top of the gorge spilling over into the water. It is a vision of verdant plenty. Virgin and inviting. White egrets standing in sentinel, their long necks stretched to attention. A pelican flies overhead its flight deliberate in contrast to the more panicked flight of the double-crested cormorant.

At La Cueva de la Vaca, the river narrows and vast limestone canyon walls rise up on either side. There is a sense of stillness, beauty and serenity.

The Caribbean port of Lívingston is physically and culturally isolated from the rest of Guatemala; it remains accessible only by boat. There are no roads into Livingston. No roads out.

Relying on fishing for much of its income, Lívingston is a mishmash of colourfully painted wooden buildings. Guidebooks speak of a town that is inhabited by the unique Garífuna people. Descended from a mix of indigenous Caribs and shipwrecked slaves, the Garífuna inhabit a scattering of coastal settlements on the Caribbean coastline of Central America.

The reality is different. Mayans own the shops, they possess what little wealth there is here. Spanish is the lingua franca. The Garifuna are a forgotten community. They have nothing.

“The town is split by apartheid,” Philip Flores says forthrightly.

His English is excellent. “I learned in Belize,” Phil explains. “We used to sail across to Punta Gorda, when it was still a British protectorate and education was good. The boat full of cassava and fruits to pay for the week. At the end of the week we would sail back home.”

An hour later, I emulate Phil’s journey of old and enter Belize. There was not a series of endless announcements nor the screech of tyres. Just the gentle ebb and flow of the tide. I step out onto the jetty unannounced.

There was no one at immigration. With only two scheduled arrivals by boat per day, unscheduled seems to go unnoticed. Eventually, an immigration officer offers me a pen and a smile. Greeted in English which is one of the three languages spoken throughout the country, as opposed to the 24 that are spoken in neighbouring Guatemala.

Stories
A Guatemala Holiday with Maximon, the cigarette-smoking hooch-tooting god
John Faithfull
Our tuk tuk screeches to a halt outside a nondescript house whose dirty walls are adorned with red and yellow posters…
Read Article

Stories
Guatemala – A land of colour
Steppes Travel
“I will wear any brand of clothing but Banana Republic,” quipped my guide. Whilst it was typical of his sense of…
Read Article

Stories
Antigua – A city saved by earthquakes
Steppes Travel
Cradled by the soaring peaks of the volcanoes Agua and Fuego, Antigua is among the finest examples of the colonial architecture…
Read Article

Stories
Guatemala Holiday: Dare I Challenge Aldous Huxley?
Steppes Travel
Lake Atitlan is Guatemala’s gem, or at least one of its many jewels. It is renowned for its scenery – it…
Read Article

Stories
Jungle Boy Escapes: The Incredible Story of Carlos
Justin Wateridge
Born in 1976, Carlos had an idyllic childhood growing up in the village of Uaxactun in the jungles of northern Guatemala.…
Read Article

Stories
A Guatemalan Thriller!
John Faithfull
A holiday to Guatemala is sure to have its quirks, a country that is a fusion of ancient, colonial and indigenous…
Read Article