Beauty And The Beast – Swimming With Whale Sharks in Djibouti

“Are you not coming in with me?” Could Akram hear the tremor in my voice?

It was not that I was afraid. I knew full well that the whale shark – Rhincodon typus is a filter feeding shark and harmless to man – but rather that I did not know what to expect.

We were in a small bay a mere fifty metres from the shoreline that was littered with a few abandoned concrete buildings. Not far away in the distance was the remains of a French naval base. A particularly unremarkable place to find whale sharks. Or so I thought. What I was to discover later is that the presence of the military meant that this was an area that was not allowed to be fished and hence the profusion of food that in turn brings the whale sharks here year after year. Appearances can be deceptive.

Our journey had begun amidst the fishing harbour of Djibouti, replete with the smells of the catch of the day and the flies buzzing around what had not yet sold. The phrase tiny acorns grow into a mighty oaks seemed inappropriate in its Englishness but not in its metaphor. I had to think positively as our boat bounced its way out of Djibouti harbour to be confronted by the towering obelisks of modern day shipping.

Given the profusion of crates, cranes and cargo was there really any chance that we would find whales sharks, let alone swim with them? The marketing poster with someone taking a selfie with a whale shark in the background seemed wildly optimistic. An hour later we stopped.

“Why are we stopping?”

It was then that I looked around and saw the French naval base and realised with a certain lack of confidence that I was the only one going into the water – not only was Akram, my guide, not going into the water but nor was the young man helping Moussa, the captain of the boat. In Akram’s case it was because of his ears, in the young man’s it was that he was afraid of the whale shark’s mouth.

“There. Over there,” shouted Akram as if to detract me from my inner doubts.

I looked to the portside and saw a fin almost flapping the surface. Was the shark on its side? Slowly I realised that it was the dorsal fin of a whale shark and the head of the shark was some twenty feet further on. I gulped.

I jumped into the water and fumbled with my mask. I put my snorkel in my mouth and took a breath only to be swamped by a wave and take in a mouthful of salt water. Spluttering, I put my head above the surface. I readjusted my mask and snorkel and put my head back into the water. Nothing. I raised my head again and looked questioningly at the boat. They gabbled excitedly and pointed behind me. I turned quickly around to see the beautiful dotted pattern of a whale shark recede into the gloom.

Opportunity missed I clambered aboard getting my fins caught on the ladder and tumbled onto the floor of the boat, floundering like a landed fish. This was not going well.

Moussa, the captain of the boat, scanned the waters, unperturbed by my incompetence and my inability to see a whale shark that was right behind me. Sure of his expertise and his waters he persevered with me. Unerringly, Moussa found another whale shark for me to try and see.

As I launched myself awkwardly from the side of the boat into the water Akram shouted at me, “Don’t touch it. It will dive.”

How was I supposed to touch it? I hadn’t got anywhere like close enough to have such a tactile experience. Kicking my legs awkwardly – I was still not comfortable in the sea – I put my head underwater to see a huge whale shark swim gracefully beside me. Against my better judgement, I swam quickly after it. Sadly I could not keep up with it, in part because I was still not happy with my snorkel and taking in sea water, and slowly the shark ghosted effortlessly beyond my visibility.

As I climbed back into the boat – still clumsily – I chattered excitedly to Akram. He smiled. “Again?” I nodded my approval.

I am not superstitious and do not believe in third time lucky but something clicked. I slipped into the water, I breathed smoothly, I swam easily and best of all I spent it alongside a whale shark for ten minutes or more.

There I was swimming alongside, in front, behind – I never quite trusted myself to swim below – the largest fish in the sea. I watched at close quarters its gills filtering furiously. I swam alongside its eye for a while, in awe of its acceptance of me.

At any stage throughout the whole time I could have touched it. I was curious to touch the whale shark but didn’t. Not because of Akram’s warning that it will five into the depths if I did so but that it was so trusting of me that it would have been wrong to violate that trust and the sanctity of the moment.

And then the shark stopped its tail dropping and it floated vertically, gulping greedily. Its mouth opening and closing in a feeding frenzy. I floated in ungainly fashion right beside it, right in front if is mouth, occasionally having to take a stroke away for fear of literally bumping into it and interfering with its feeding.

Euphoric I had no problems getting back into the boat this time.

I dived for one last time. I looked around and turn to my left almost to bump into a feeding whale shark. Both as surprised as each other. Both go our separate ways.

For the record, restraint has not been my strong point and in a moment of weakness, I took not one but several selfies of me and my passive partner. 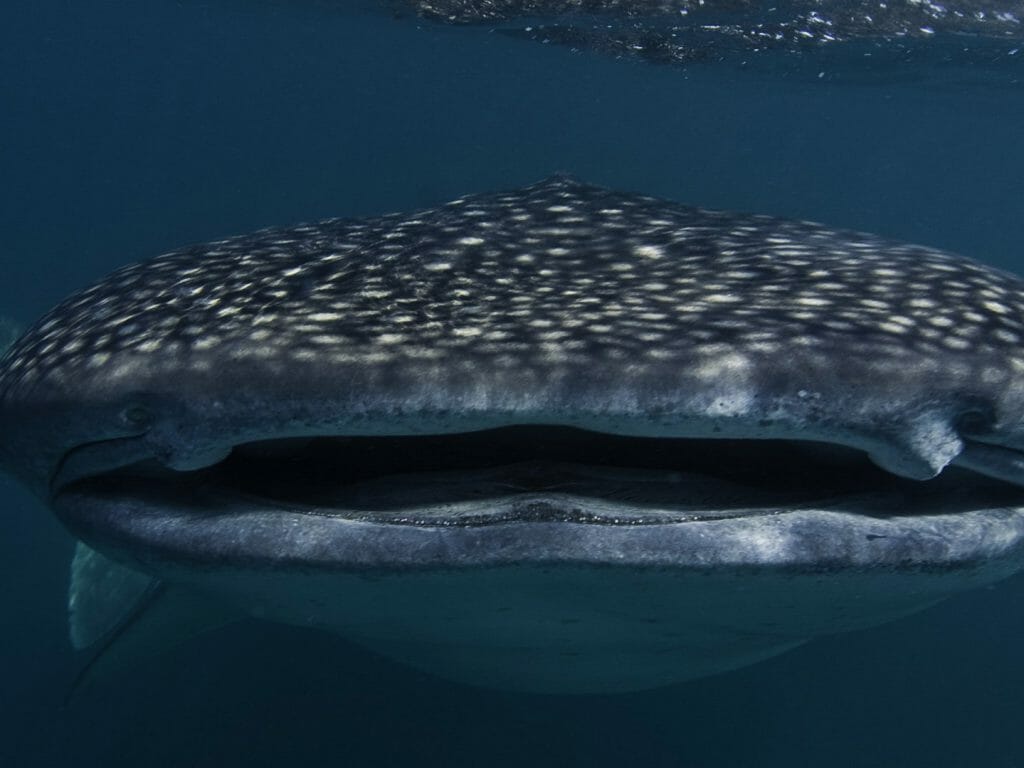 Stories
Discover Djibouti
Justin Wateridge
“Djibouti means ‘the place where the monster was killed’,” Akram, my guide informed me. An unfortunate epithet for this small gem…
Read Article